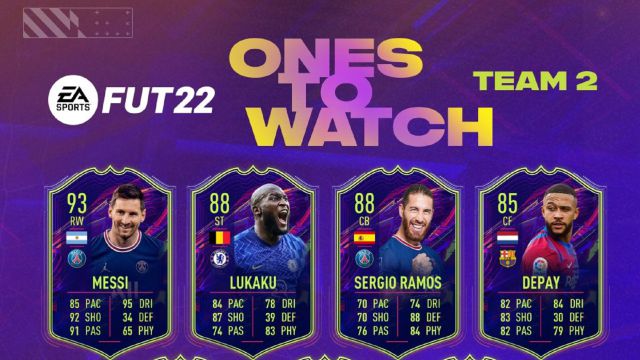 FIFA 22 reveals the second team of Promises (Ones to Watch), now available in Ultimate Team. Messi, Sergio Ramos, Héctor Bellerín and Lukaku, among others. FIFA 22 is out now on PS5, PS4, Xbox Series X | S, Xbox One, PC, Nintendo Switch, and Google Stadia. The new installment of EA Sports offers us one more year of virtual football in its main game modes, from Ultimate Team to Career mode. As happens every year, Ones to Watch celebrates the most outstanding transfers of the summer market. EA Sports has already revealed who participates in the second team.

Ones to Watch Team 2 in full

The eleven undoubtedly stands out for the participation of Lionel Messi. The Argentine star is the highest rated player in the game, and his average score can still grow thanks to his promise article. From 93 points he can go up to 95 no less, if the objectives set by the company are met. You can meet them at this link.

Among those selected we find up to three LaLiga Santander players: Héctor Bellerín, De Paul and Depay. The Dutchman is the highest rated of the three, with an average of 85. The other two have 82 and 78, respectively. If we go to the rest of the Spanish representation outside our league, Cucurella and Sergio Ramos complete the Spanish cycle.

Then we leave you with all of them.