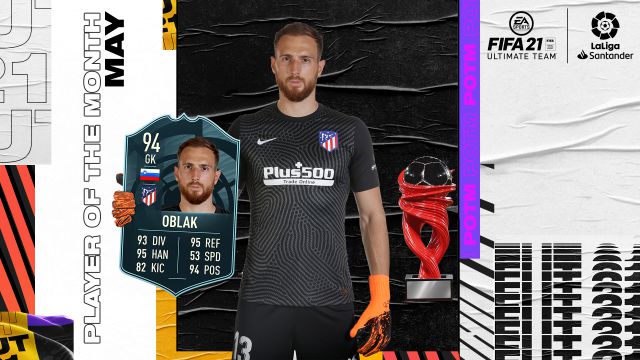 FUT FIFA 21: Jan Oblak is chosen as the best player in LaLiga for the month of May 2021. The Atlético de Madrid goalkeeper achieves his special card, now available. FIFA 21 highlights the best LaLiga player during the month of May. The community has chosen by popular vote Jan Oblak as the most relevant footballer at the close of the Spanish competition. The Atlético de Madrid goalkeeper has been one of the architects of the victory of the mattress team this season. For this, he achieves an outstanding card in Ultimate Team.

Oblak POTM is one of the best goalkeepers that you can unlock in Ultimate Team. His 95 reflexes and 94 position make him a top goalkeeper for high-level matches, such as in FUT Champions or the final divisions.

Few of you will find better than him, although his value is accompanied by the price you must pay, and that is because completing his two challenges will not cost cheap precisely.

Jan Oblak, how to complete his challenges

Next we tell you what are the completion requirements and which players you must place to solve in an easy way. You have until June 24 to get the letter.