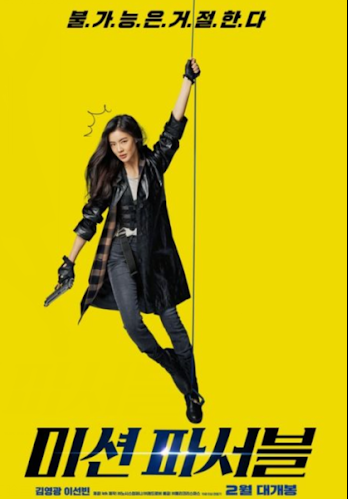 Scheduled for release in February, Mission Possible is a comedy action film about spies. It features a Chinese agent from the Ministry of State Security (MSS) and a former South Korean Special Forces agent who currently owns a detective company.

Kim Young Kwang as Woo Su Han, is the owner of a private investigation agency. He will be mistaken for a national intelligence service agent by YooDa Hee played by Lee Sun Bin.

In Mission Possible, Lee Sun Bin as Yoo Da Hee is a high-ranking agent, in charge of investigating a big case about the smuggling of arms between China and Sue’s Korea, executed by a dangerous criminal network that will trap the two protagonists in situations life or death.

Meanwhile, other Mission Possible posters show the faces of the protagonists with serious and suspicious expressions, accompanied by the legend: Mission possible? Are you kidding.