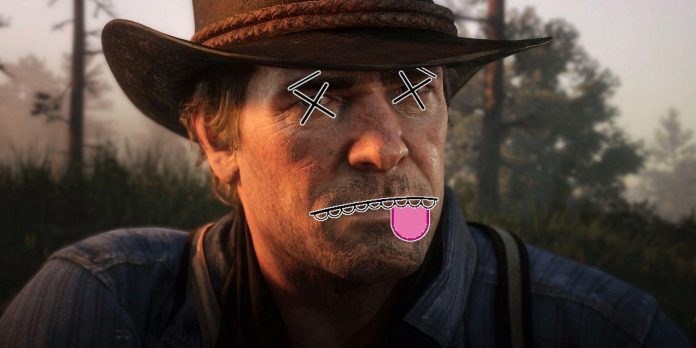 When it comes to realistic video games, Red Dead Redemption 2 is often called one of the closest examples of digital realism in the industry. Containing one of the most impressive game graphics, the visuals can be raised as an example of how to create ultra-realistic worlds. Nevertheless, turn-of-the-century role-playing games still contain a lot of errors, like many other games. However, there is one glitch noticed that may actually have some benefit.

As The Gamer noticed, YouTuber Brother Foller recently uploaded a video showing some gameplay footage from Red Dead Redemption 2. In the short clip, you can see Arthur Morgan standing dangerously close to the edge of the cliff. Then the player opens his inventory and forces the main character to eat several poisonous plants. After being poisoned, Arthur throws himself off a cliff, but not before he starts vomiting. The animation plays throughout the fall, and after landing, he doesn’t seem to have been hit by the impact.

RELATED: The ambitious Red Dead Redemption 2 mod Adds a Brand New single-player story with a Custom character to the game

In fact, it seems like this is a pretty useful bug for anyone who plays the game and needs a quick and painless way to fall from a great height. There are some potentially funny bugs in Red Dead Redemption 2, especially when it comes to character models. There are times when the texture of Arthur’s skin does not load, which may make him look like a nightmare. There is also a method that allows players to earn huge amounts of money by manipulating the duplication error. Like the “vomit bug,” this one borders on useful, even if it breaks the spirit of the game.

Given the huge popularity of the 2018 Rockstar release, it’s not surprising that fans are hoping for Red Dead Redemption 3. The success of the series means that a new part should be inevitable, but now the studio is working on Grand Theft Auto 6. It may take years before the new part of RDR, if it happens at all.

Unfortunately, the developer seems to be moving away from this series as he puts his efforts into the next GTA game. Due to the termination of the development of Red Dead Online, despite the appearance of new content, the Western franchise may well remain in the mud. Of course, Rockstar may well continue the series after GTA 6 is ready, since the third Red Dead Redemption game is likely to become a guaranteed source of income for the company.

Crunchyroll Acquires the rights to Stream Your Name and Akira

The Flash 7×10: Family Iissues Surface In The Series