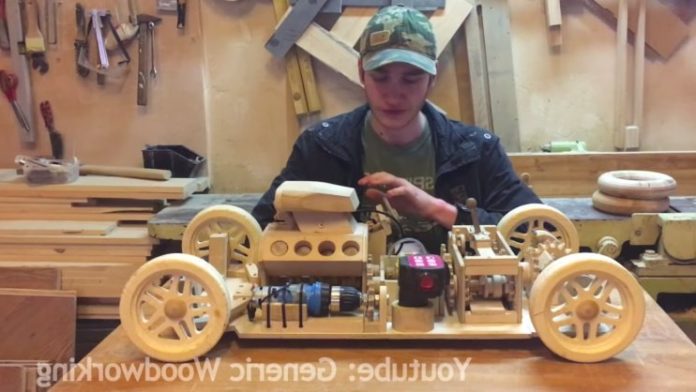 A high school student in Lithuania designed a completely wooden car, from its engine to the powertrain. The working image of the car and the flawless functioning of the parts are worth seeing.

A 17-year-old teenager shared his wooden car model, which he designed and developed for 6 months, in about 300 hours, on Reddit. The model, which has a wood-designed V8 engine and 3 manual gears that transfer power to the rear wheels, was produced at a cost of only $ 35.

The wooden car originally emerged as the physics project of the Reddit user, an 11th grade student. The high school student is young, he has been dealing with woodworks since he was 4 years old and he is aiming to complete this project thanks to his desire to produce something in his field of expertise.

His interest in mechanics made him progress on the wooden car model
Stating that he is also very experienced in playing with technical parts such as LEGO, he says that he has an interest in everything that is mechanical and can learn a lot from other unrelated fields. It also attributes the success it has achieved with this project to the experience of working on bicycles.

In the video he shared, explaining the process used in each component of the wooden car, the teenager says he received help from his father to build the engine block and wheels. In his post on Reddit, Genç states that only he works on the whole project, that the process is stressful and that the lack of a similar design on the internet forces him.

See Also  According to a Research, Luxury Car Owners Become a Trouble

Speaking of the complexity of the gearbox, the high school student reports that he spent weeks working on different design concepts for the gearbox and spent a lot of time designing the components correctly. He also notes that there are many fine tuning and confusion involving clutch and hydraulics.

The car built by the Lithuanian high school student looks quite impressive. It is absolutely admirable that the engine starts up and everything works perfectly when the ignition key is turned. Let’s leave you alone with the video without further ado.

Fully functional car made of wood:

Twitter Has Made A Little Design Change In The iOS App

CARA DELEVINGNE AND ASHLEY BENSON ENJOY THEIR HOLIDAYS IN DISNEY

As the Oceans Warmer, Sea Creatures Go Towards the Poles

Supports ıce cream and SELPINK How to stream correctly?

Jungkook reveals his true inspiration to be …

Fortnite: how to watch the FNCS 2020 final live

A Resource Announces Which iPhones iOS 14 Will Support