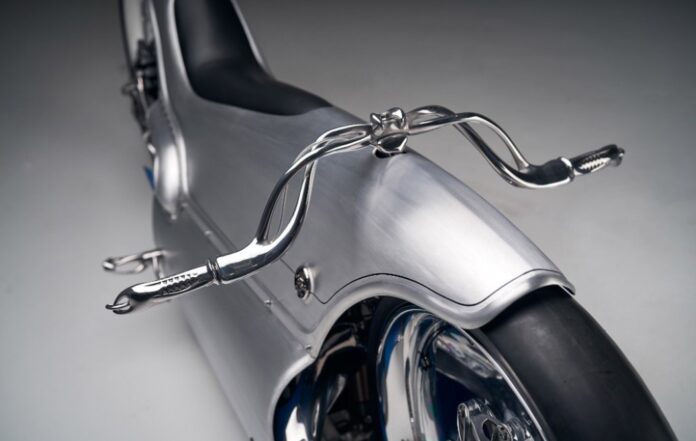 Fuller Moto produced a magnificent electric motorcycle called 2029. The titanium parts of the motorcycle, which has an aluminum body, were produced with a 3D printer. Transparent polycarbonate was used on the wheels.

In the majority of future predictions and concept designs made before the 2000s, it was depicted that people would walk around as if they were wrapped in aluminum foil, and metallic colors would come to the fore. Although people have not been wearing bright clothes for a long time, metal has managed to find its place in the design.

The electric motorcycle of the future goes to the museum:
The motorcycle named 2029 will be exhibited at the Haas Motorcycle Museum and Sculpture Gallery, where more than 190 species produced from 1901 are exhibited. The Fuller Moto team was inspired by the French motorcycle 1929 Majestic, produced 100 years ago. Fuller Moto brought today’s design to the present by keeping up with a century of innovations.

The motorcycle, manufactured by Bryan Fuller and his team in Atlanta, used materials and equipment that were not available in 1929. In addition, parts and designs that could be produced with today’s technology were added to the motorcycle, although it was not possible to do it by hand work at that time. 3D printers were used for the production of titanium parts used in the interior of the vehicle. It is not normally possible to manually shape the titanium used in this process. The exterior of the vehicle was covered with aluminum.

Futuristic coating on the Zero FXS motorcycle:
When we look at the interior of the vehicle, Zero’s FXS electric motorcycle welcomes us. The engine of this vehicle has a range of 168 kilometers. This new design is the same size as the original 1929 Majestic. The rims of the 23 inch wheels were replaced with transparent polycarbonate.

The motorcycle, which used blue and red colors in its previous models, was decorated with a blue add-on while moving to the 2029 model. The handlebar on the chassis was placed in the middle again to make the model feel.