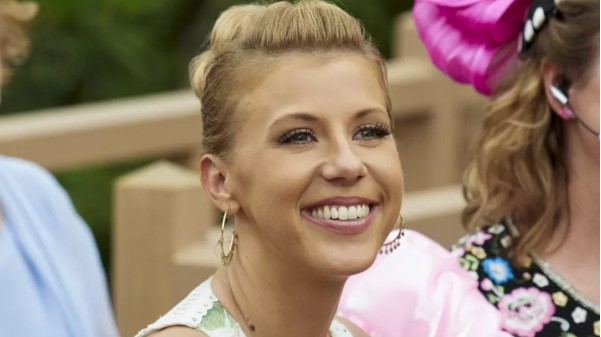 Preserving the memory of him.

The “Full House” family celebrated a rather important milestone back in September, marking the 35th anniversary of the premiere of the ABC sitcom. But, as the actors who played the beloved Tanner family reflected about three and a half decades, they did it without a pretty integral member. Bob Saget died in January from a traumatic brain injury at the age of 65, and if it was not known before how close the TV family had been for many years, now it is known. Jodie Sweetin was among the actors who shared stories and memories of her TV dad, and she recently spoke about what it was like to celebrate such a big anniversary without him.

Jodie Sweetin was only 5 years old when she started playing Stephanie Tanner’s middle sister in the 1987 family comedy, which lasted eight seasons. Considering how much she grew up on the set of “Full House,” it’s easy to understand how she came to treat her colleagues like family, making this milestone 35th anniversary bittersweet without their patriarch. Sweetin told ET:

Thirty—five is a lot. And whenever I think about 35 years, I think I live longer than 35 years, which is terrible. But it was a bit bitter. We always like to celebrate these important milestones, and every year we think that this is another year when we were all a big family. And so we definitely, definitely missed Bob, but we know he was with us. He’s always right in the middle. He will never be the center of attention, I love him.

It seems that even though Bob Saget, who was affectionately called the “father of America” for the role of widower Danny Tanner, was not there physically, his spirit was felt by his loved ones. Jodi Sweetin said this when she marked this important day with several photos from the past on Instagram, noting that they wouldn’t be the family they are without Saget:

It wasn’t the first time Bob Saget had announced his presence on one of Jodie Sweetin’s big days. John Stamos (aka Uncle Jesse) shared a cute story about Sweetin’s wedding day in July, when he grabbed a random shirt from his closet when he ran out the door to her wedding to Mescal Wasilewski. Stamos said:

[I] put it on and I’m driving and it feels big. When I got there, I looked and realized because Kelly [Rizzo], Bob’s wife, gave us a bunch of stuff and it was Bob’s shirt… I cried when I realized [and] said: “Jody, Bob’s here.”

John Stamos has been vocal about how much his TV brother-in-law meant to him, even taking part in the post-funeral “punk rock Shiva,” a tribute that was released on Netflix called Dirty Daddy: The Bob Saget Tribute. Stamos joined Jodie Sweetin, Candice Cameron Bure, Dave Coulier, Scott Weinger and others who showed their love for Bob Saget on the Sold-out anniversary.

While Dave Coulier (Uncle Joey) expressed interest in creating another spin-off “Full House”, John Stamos said that without Bob Saget everything would be different, and they will continue to honor the actor in other ways. There may not be another spin-off planned, but there’s plenty to see if you want to remember Bob Saget, including the entire Fuller House series available on a Netflix subscription. Full House is available for streaming with an HBO Max subscription.

James Corden Apologizes after Being Criticized on Instagram for Bad Behavior...