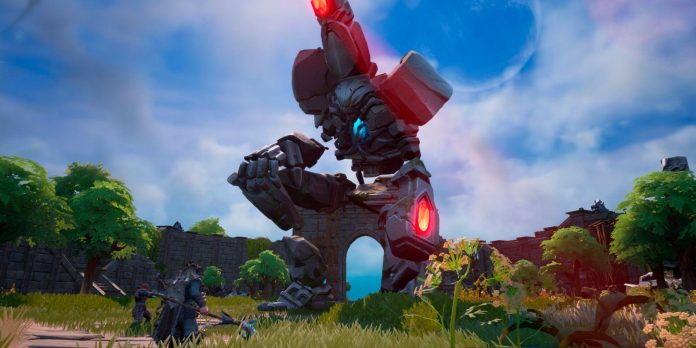 As a replacement for E3, the showcases around Summer Game Fest 2022 gave viewers plenty to anticipate. However, Geoff Keighley’s Summer Game Fest kick-off was noticeable packed full of sci-fi and horror games. Comparisons to titles like Dead Space were common, and jokes about this dominance even affected Dreamside Interactive’s survival-RPG Frozen Flame.

Frozen Flame aired a new trailer during the PC Gaming Show on June 12, announcing its plan to release through Steam Early Access this fall. Dreamside founder Serge Korolev said it was a “really nice experience” owed to publisher Ravenage Games, one that garnered Frozen Flame a lot more attention alongside its Steam Next Fest demo. With that feedback came jokes from audiences that were “sad” to not see another sci-fi title, but Korolev genuinely believes Frozen Flame’s fantasy/survival skew will help it stand out at launch. Game Rant spoke to Korolev about building the game’s fantasy setting and multiplayer.

Production on Frozen Flame began in 2017, its initial kernel to create a survival game ala Rust that was more focused on narrative and construction elements. Even the earliest prototypes were centered around an Ice Citadel – the endpoint of the adventure where players must venture if they hope to stop the Faceless; a being that’s spreading a curse across the land of Arcana.

Marketing materials describe Arcana as a “land of dying dragons,” and some of these beasts have been corrupted by the Faceless. Each player is a resurrected “Pilgrim,” according to Korolev, though there is no single chosen one as some would expect from fantasy media. These Pilgrims can build bases with construction mechanics heavily inspired by Iron Gate AB’s Valheim, giving them a warm place to spend the night and avoid enemies, as well as prepare for upcoming battles, cook food, and brew potions.

Character customization plays a role in Frozen Flame, though not to the extent of MMORPGs like World of Warcraft. Pilgrims can select a few body types at the start, and Korolev said options may be expanded while playing, but “we believe players should represent themselves via equipment.” Armor can be found all around Arcana, such as a unique glowing helmet dropped by Frozen Flames’ slime-like enemy Bubbles. Meanwhile, players can emphasize class builds by gathering the “knowledge of the ancients” and resources like Flames – which act like souls in FromSoft’s Dark Souls series.

When one hears they’ll be exploring a world of dragons in a fantasy RPG, comparisons to The Elder Scrolls 5: Skyrim will arise. However, Korolev is quick to explain that Frozen Flame’s dragons aren’t like those in Skyrim. With exceptions like the ancient spirit guide Chronos, they’re much rarer and act as “the last goal and prize.” Though he said Twitch streamers like Quintin “Quin69” Crawford were disappointed by this in the Steam Next Fest demo, Dreamside wants to make it clear that dragons are the ultimate goal for a reason.

“The dragons aren’t bad, but cursed, and that’s the reason things are bad … You feel that impact of the dragons.”

Frozen Flame will have two modes when it releases, as Korolev said it was impossible to create one “united experience” that pleased everyone. “It’s better to focus on the flavors people like,” he said. There will be a campaign mode playable with 10 people that acts similar to Valheim, moving through several biomes and bosses to reach the Ice Citadel. Then there will be a survival mode “for people who like PvP and survival with more hardcore gameplay settings.” Korolev warns that new players will probably die within their first few minutes on a survival server.

Dreamside Interactive wanted to make Arcana a fully procedural world, but this clashed with Frozen Flame’s exploration. Korolev said it went the “middle route” instead, with pieces of the world spawning in different areas. “Imagine it like a deck of cards that mixes differently on each session, creating partially procedural worlds.” Within this framework, campaign servers will find minimal differences, but survival mode makes the situation different each time.

Regardless of a server’s settings, Frozen Flame’s Steam Next Fest demo only showed off its starting zone, but Korolev said the team already has more areas, enemies, and bosses created; currently in playtesting with “a close group” on Discord. One such addition is the Dragon’s Grove biome, its second area which houses enemies such as the Manticore (seen above in a teaser image provided exclusively to Game Rant).

Feedback from the last demo is being added onto Dreamside’s development schedule, but Korolev said a new demo is still planned to drop before the Early Access launch. According to Ravenage Games, over 60,000 people played Frozen Flame’s demo throughout the week of Steam Next Fest, and there was around 70,000 hours of viewing time on streaming platforms.

Dreamside’s focus on multiplayer held back certain features. For example, Korolev said it would have been difficult to optimize a physics system as complex as Valheim’s. Building mechanics in general clashed with the game’s PvP at first, leading to complaints that new players were unable to advance as their homes were looted and destroyed. Thus, the team instituted private zones to give new players a chance, and it’s toying with the idea of making optional zones open to PvP and griefing instead.

However, Korolev has more lofty goals for the game’s multiplayer. While he says it will never go full MMO with all the genre’s trappings – from unending story content to quests like killing 100 boars – he wants more fun social elements “and a feeling you can make a new part of the world.” After completing the story, Korolev believes the “high-level” gameplay in Frozen Flame could be players building their own shops and other infrastructure, helping out newer players, and ultimately building something greater.

That’s not unlike Dreamside Interactive, as Korolev wanted a team which could make something far more complex than he ever could have alone. He hopes players’ lofty expectations for Frozen Flame are satisfied after its projected nine-or-so months in Early Access. More than anything, he wants to make it as stable, balanced, and enjoyable as possible.

“Surprisingly, we’ve got a lot of families who are playing the game. Couples, or friends just play it together. It’s not an MMO, but it has a lot of similar emotions … So let’s see how it goes, hopefully it will be the next big thing in the genre.”

Frozen Flame is currently in development for PC, with a Steam Early Access launch expected in fall 2022.

The trailer for the second season of Los Espookys celebrates the...