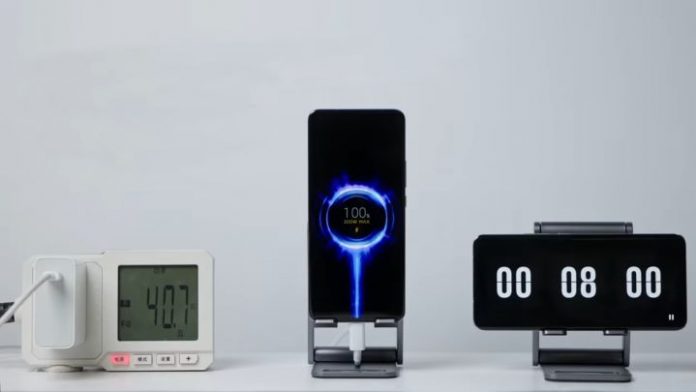 Xiaomi: Having the mobile charged in a short time is almost impossible today. It is true that there are terminals on the market that with the appropriate technology charge up to 4,300 mAh in an hour, so in 15 minutes you can have 25% if the battery was completely discharged. But what if we tell you that you can have your mobile charged in 8 minutes? Sounds good, no doubt, and this seems to be Xiaomi’s new proposal.

Smartphone batteries are getting bigger and bigger. And you have to nurture a machine that has a touch screen that also where you communicate with the device. A processor that works faster and faster if you edit video or play games. In the end it all adds up and it is almost also important that the battery is recharged quickly after an intensive session or simply after several days of use.

As we told you, fast charging is highly variable depending on the company and 18, 20 or 30 watts are the order of the day. But if we tell you that Xiaomi works on a way to charge your mobile from 0 to 100% in 8 minutes, it may seem crazy. At least it will be until you take a look at the video that accompanies this article. As you can see, the 4,000 mAh battery is capable of filling 8% in one minute, perfect for turning on the terminal and making some calls. But this is just the beginning, because if you have one more minute you get to 30%, perfect to end the day.

Going from 0 to 100% in 8 minutes is very little time for a smartphone. It seems that Xiaomi wants to catch up with this technology that everyone expects as a standard in the future, the earlier the better. At the moment, in the market we find mobiles with a charging power that reaches 65w of power as is the case with the Oppo Find X2.

But it is in Xiaomi itself where we find great progress. In case you did not remember, at the end of last year we saw that the Chinese firm works on a wireless charging system that in a matter of 20 minutes you filled the battery to the top. However, it is a fact that cable charging offers much more power, although it does not hurt to have other charging options.