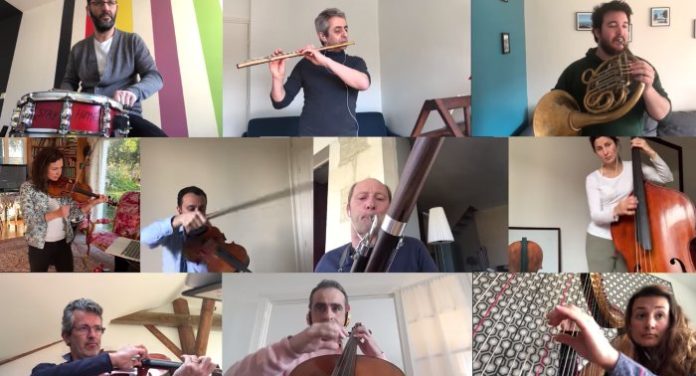 The coronavirus epidemic, which affected the whole world, caused millions of people to stay in homes. Those who want to make good use of the time at home resort to various activities. In France, artists came together on the internet and played the Spanish dance Bolero.

Members of the French National Orchestra played Bolero, a Spanish dance with a heavy rhythm. The artists, who came together with different musical instruments, had fun playing themselves, and those who watched also enjoyed it. The stolen instruments were combined into a whole later in assembly.

Some of the artists who made 51 instrumental interpretations played in the kitchen and some in the living room. The images taken with individual mobile phones were later transformed into a mosaic. “I could never have dreamed of synchronizing the sound of instruments that don’t play together,” said Radio Editor of the project, Radio France video editor Dimitri Scapolan. said.

Stating that everyone is in perfect harmony, Scapolan said, “All I had to do was adjust the levels a little and add some resonance. It was a pleasure. ” he spoke. This unusual interpretation of Bolero, one of the world’s best known classical music tracks, has been transformed into a different version by conductor Didier Benetti. The original work is about 15 minutes long…

Making the quarantine days enjoyable, the team also appealed to the souls of others. “This is a virtual merger; we gathered on the ‘Cloud’,” said violinist David Riviere. Speaking to Radio France, music director Michel Orier pointed to the quarantine and said, “It is terrible not to work. But with this animated video, we wanted to say to the public, ‘We’re still there for you.’ ” commented.

On the other hand, the Rotterdam Philharmonic Orchestra signed a similar recording with Beethoven’s Ode to Joy and Toronto Symphony Orchestra Aaron Copland’s Appalachian Spring. Each one brought together 20 musicians.

ETH Required For Ethereum 2.0 Has Been Gathered

A Mysterious Monolith Found Somewhere in the US

What Are The Comments For Bitcoin And Ethereum?

What do the tattoos of the BTS members really mean?

Instagram QR Code: how to create a code for your profile

Billionaire Investor Warns Against The Dollar