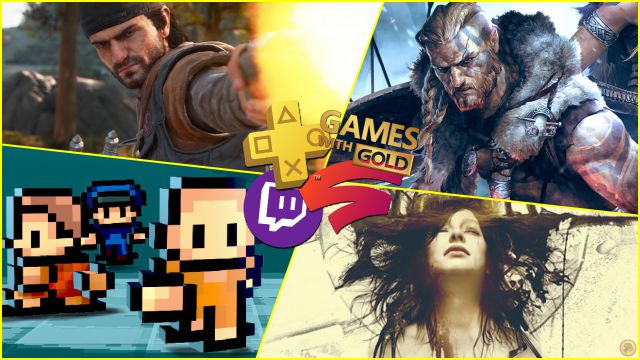 We go over all the free games and when they will be available to players subscribed to the PS4, PS5, Xbox One / Series, Stadia, and PC services.

We come to the month of April 2021. Spring begins, the good weather is approaching and, for many months that pass, video games are still there to accompany us in the moments we need. What does not change is the policy of Sony, Microsoft, Google and Amazon when it comes to offering free games with their subscription plans every month, so let’s find out what awaits us during this fourth chapter of this year.

As is the tradition at MeriStation, we start this April, once Easter is over, collecting all the free games that companies give away with their subscription programs for PS4 / PS5, Xbox One / Xbox Series, Twitch Gaming (PC ) and Google Stadia throughout the month; another way of referring to PS Plus, Xbox Live Gold, Prime Gaming and Stadia Pro.

Before starting, we remember that from MeriStation we have made several articles where we collect the best free video games for PS4, Xbox One, PC and Nintendo Switch of 2021.

PS Plus and Play At Home: Days Gone, Oddworld Soulstorm, ABZU and more

Sony’s quintessential service, which now has 47.4 million subscribers worldwide, offers its subscribers Days Gone, the 2019 Bend Studio work released in 2019, at no additional cost. Even if it’s for PS4, PS5 players can enjoy it. with improvements (60 FPS as the main novelty) and reduced loading times. Also, this time only on PS5, Oddworld Soulstorm, a premiere like titles like Destruction AllStars were months ago. They are already available for download throughout the month.

To this list we have to add all the titles that make up the Play At Home initiative of 2021, for which for a limited time we can purchase, without any type of condition (no need to be subscribed to anything; just access the PS Store, add to the cart and it will be registered in our library) this Thursday until next April 23 at 05:00 CEST:

We finish with the PS Plus Collection, the other great claim of PlayStation Plus, a permanent gift until further notice for players subscribed to the program only on PS5. Includes a total of 20 “defining games” from the PS4 catalog (executed via backward compatibility) such as Bloodborne, Uncharted 4, Days Gone, Detroit: Become Human, God of War, Infamous Second Son, Ratchet and Clank, The Last Guardian, The Last of Us Remastered, Resident Evil 7, Battlefield 1, Monster Hunter World, Crash Bandicoot N. Sane Trilogy and more.

You can check all the content of PS Plus in April 2021 here.

The Games With Gold, a subscription that will soon be no longer required to play free-to-play video games on Xbox consoles, is back in April with a total of four titles that we can access either through the standard subscription Xbox Live GOLD or Xbox Game Pass Ultimate, which includes the above. Vikings: Wolves of Midgard, Truck Racing Championship, Dark Void and Hard Corps: Uprising are the chosen ones. We review all the dates.

Truck Racing Championship | Available between April 16 and May 15 on Xbox Series X | S and Xbox One.

It should be remembered that we are in time to claim one of the games available in the Xbox Live GOLD game rotation last March: Vicious Attack Llama Apocalypse will remain free until April 15. All previous generation titles are playable on Xbox Series X | S through backward compatibility.

You can check all the content of Xbox Live GOLD in April 2021 here.

Twitch Prime Gaming offers 8 games: The Escapists, Before I Forget, Optica and more

This April we have a total of 8 free games with the Games with Prime promotion. Members subscribed to Amazon Prime have, among other advantages related to Amazon solutions for listening to music or watching movies and series, access to Prime Gaming, which each month gives away games (approximately, since it sometimes lengthens its offers) that we can enjoy on our computer through its own launcher. For the month of April, games like The Escapists and Before I Forget stand out. We leave the list below with the exact dates so that you know how long you can claim them.