Home Tech Free Fire: meet all the female characters in the game 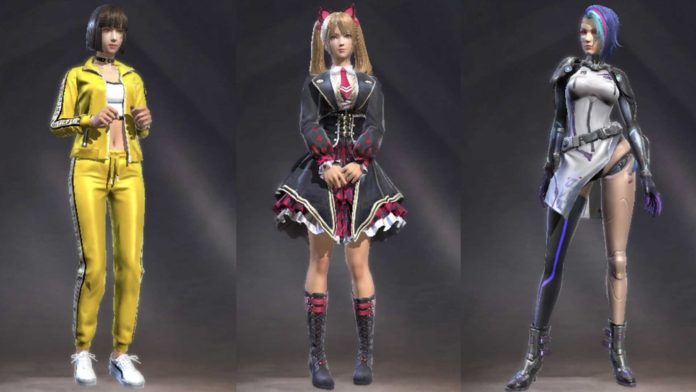 Free Fire is a Battle Royale developed by Garena that has as a differential the wide range of characters within the game. They vary in skill, physiognomy, personality and historical context. Until the Elite Pass launched in March, 25 options were made available in the game’s catalog – of which 12 are female characters. Next, meet the women from the Free Fire universe and their respective skills.

A124
Ability: Battle emotion;
Price: 499 diamonds.
A124 is a kind of robot composed of artificial intelligence and human DNA. His special ability, ” Battle Emotion ”, transforms energy points (EP) into hit points (HP). Rates range from 25 to 60 depending on the level reached. Great choice for those who like extra sustenance in gameplay.

Caroline
Ability: Extremely Agile;
Price: 499 diamonds.
Caroline is useful for shotgun specialists. That’s because the character gains movement speed bonuses (3 to 8%) when carrying a shotgun class weapon. In the story of Free Fire, Caroline is a very popular student in high school, from a wealthy family and a close friend of Kelly’s.

Kelly
Skill: Running;
Price: 399 diamonds / 2000 coins.
And speaking of Kelly, Caroline’s close friend – also known as Shimada Kiriko – is next on the list. She is a high level athlete specializing in athletics. Therefore, your special ability gives you increased running speed (1 to 6%). Kelly is the character with the highest sprint in the game, becoming interesting in rushing, capturing loots and escaping from safe zones.

Laura
Skill: Sharp Sniper;
Price: 499 diamonds.
Laura is a special agent who excels in handling weapons since childhood. Your strength, therefore, would be no different: bonus of 10 to 30% accuracy when targeting with any arsenal. The character is recommended for players who like to explore long-range sights, such as snipers.

Misha
Ability: Accelerating;
Price: 499 diamonds / 8000 coins.
Misha is a character that every squad would like to have. After all, your skill grants driving speed and reduces damage suffered by opponents when driving. Rates range from 2% to 12%. Her skill at the wheel is so notorious that the character has earned the nickname “Queen of Racing”.

Moco is the great communicator of Free Fire. Hacker of remarkable skill and known by the nickname ” Chat Noir ” (black cat in French), the character manages to invade any cyber system without being detected. His skill “Eye Hacker” is one of the most interesting in Free Fire: it marks the enemy who shot for two to five seconds and the information is shared with the entire squad.

Nikita
Skill: Fighter;
Price: 499 diamonds / 2500 coins.
When the safe zones are closing and the combat becomes more and more intense, this is the perfect setting for Nikita to shine. The character owns the ” Fighter ” ability, which speeds up reloading submachine guns by up to 24%. Nikita is an Olympic shooting champion, celebrity bodyguard and sniper.

Notora
Ability: Fast Healing;
Price: 499 diamonds;
One of the most respected bikers in the Free Fire universe and a great friend of Misha, Notora also excels at the wheel. The character’s special ability is called “Fast Healing” and restores the life of allies when they are inside a vehicle.

Olivia
Ability: Healing Touch;
Price: 399 diamonds / 2000 coins.
Olivia is another valuable character in duo and squad modes. The skilled nurse, known for saving the lives of many people, has the skill “Healing Touch” as her card. She recovers allies’ hit points with values ​​ranging from 6 to 40 HP. Olivia provides sustain and immediate support to their squads.

Paloma
Ability: Dealing with Weapons;
Price: 499 diamonds.
Paloma is another character that stands out for support skills. The former model and current arms dealer lives up to her job: she can carry up to 180 AR-type bullets in her backpack and take up space in her backpack. If you need extra ammo throughout the fall, just call Paloma.

Shani
Skill: Armor Recycling;
Price: 499 diamonds.
Shani is a mechanical engineer who works on a junkyard. He even met A124 at work and developed a great affinity for the robot. Within the game, the character puts into practice the skills of the profession and recovers durability points from helmets and vests with each confirmed elimination. Skill very useful when exchanging.

Steffie
Skill: Ink Shelter;
Price: 499 diamonds.
” Shelter of Ink ” is the special ability of the newest character Steffie. It manages to reduce explosive damage (15 to 25%) and fire damage (5 to 7.5%) at interesting rates, managing to survive on the front lines longer than the others. Steffie is an urban artist specializing in graffiti.