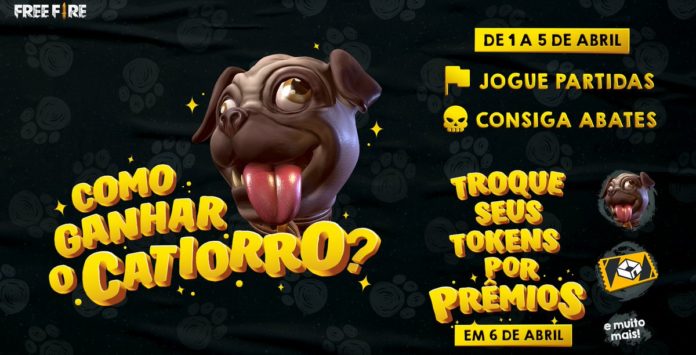 Free Fire, Garena’s Battle Royale available for download on Android phones and iPhone (iOS), hosted last Wednesday (1) the Bora Pipocar ​​event, exclusive for Contra Squad (CS) mode. Participation in the event can yield several free rewards, but the highlight is the Catiorro mask. Players must play a certain number of games and kill several enemies to obtain the code, which can later be redeemed. The event is available until April 5, 2020.

But after all, what is the CS mode in Free Fire? Contra Squad is a 4×4 that does not follow the rules of Battle Royale present in classic and ranked modes. In this version, the objective is to eliminate the enemies of the other team. Matches are played on the Bermuda map in a best of seven (MD7), with each round lasting a maximum of one and a half minutes. Before each round, players must buy the armaments and also distribute them among other squad members.

The main reward of the Bora Pipocar ​​no Free Fire event is the Catiorro mask, which represents a dog with bulging eyes and tongue out. Apparently, the mask was inspired by Pug dogs. In addition to the accessory, it is also possible to obtain a personalized room card, a Steffie memory fragment, a level 6 character card, a Flaming Skull weapon box and also a campfire card.

To get tokens, players must complete five daily missions. Each mission offers a number of different tokens. Players must play 60 minutes and 120 minutes, and kill 10, 20 and 30 enemies in CS mode to accumulate a total of 35 tokens per day.

Event and ranked in CS mode
Garena also announced that next weekend, between April 4th and 5th, the Free Fire Against Squad Challenge will take place, with the participation of big names from the Brazilian scene. The friendly event is a way to promote the new 4×4 ranked match mode, which is expected to reach the public through an update scheduled for April 9th. The matches will be broadcast live on Garena’s official YouTube channels and BOOYAH! from 1 pm, Brasília time.