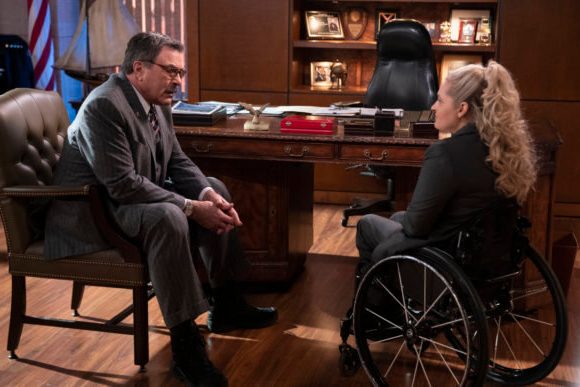 Season 11 of Blue Bloods looks like it will have a new member of the police team who will be in a wheelchair. Actress Ali Stroker as Detective Allison Mulaney. But what will Frank Reagan do with his condition? Check out the first preview of what we talked about.

Season 11 of Blue Bloods, it seems, is putting Frank Reagan, to make a decision when a high-ranking cop ends up in a wheelchair and still wants to work at the crime scene. Allison Mulaney.

The recent revealed trailer for the episode, “Redemption,” from season 11 of Blue Bloods, which will air today Friday, January 8, seems to have strong decisions with its characters.

Frank Reagan must decide whether the department can accept a request to stay in the field from Detective Allison Mulaney, a praised police officer who now uses a wheelchair after being injured in the line of duty.

In the two videos that show the preview of what the episode “Redemption” will be, Detective Mulaney is seen, taking advantage of taking Frank off guard in the middle of a conference to make him the proposal to remain on the team.

In addition to Allison’s situation, Erin is in conflict over the weight of her authority in sentencing a man guilty of vehicular manslaughter and Danny and Baez go after a carpool rapist.

Meanwhile, Jamie and Eddie team up to help a partner when his partner is shot at work, leaving him in bad shape.

The episode of Blue Bloods, called, “Redemption”, will be broadcast today January 8, 2021 by CBS television.