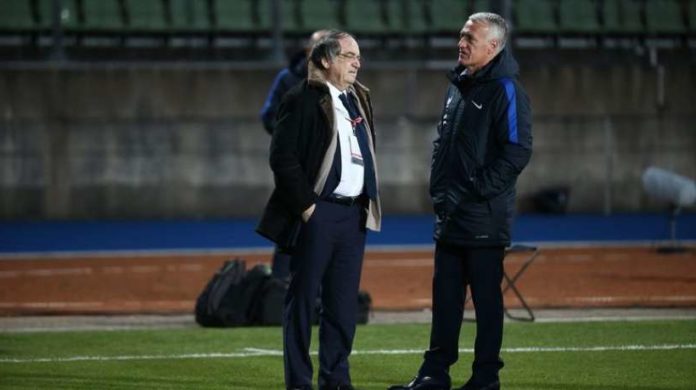 This Monday, France hosts Turkey at the Stade de France for a qualifying match at Euro 2020. This meeting looks very tense.

This Monday, the France team will play a good part of its qualification for the next Euro 2020. Indeed, if the Bleus Didier Deschamps beat Turkey at the Stade de France (meeting of course to follow live on our live commented) , the World Champions will be qualified for the next continental competition. Except that this confrontation alarms the authorities and is ranked high risk of overflows.

Indeed, the geopolitical context is already charged and the President of the Republic, Emmanuel Macron, asked his Turkish counterpart, Recep Tayyip Erdoğan, to stop his offensive in Turkey. Which probably does not please Turkish fans. At the meeting to go already, the French anthem had been lavishly whistled and it is saying that the two nations do not live, at this moment, of love and fresh water. The security system will be large with 600 police and 1400 stadiers (instead of 1100) according to Le Parisien.

“The atmosphere can be tense”

The precedent of 2009 inevitably calls for caution since the match was interrupted for a good five minutes when projectiles and smoke fell on the lawn of Gerland. Finally, there is a real doubt about the number of Turkish fans who will be present in the bays of the Dionysian forum. Officially, they will be 3800, but it could be that the number is going to 25000 fans. Which would be more complicated to manage of course.

See Also
The Netherlands thanks Wijnaldum

For his part, Noël Le Graët, the president of the French Football Federation (FFF) received the Turkish ambassador. “I received the Turkish Ambassador to make contact with his fan groups and have their own security. We are in contact with the Ministry of the Interior, because there will be many Turks. Some travel, others live in France or Europe, and not all share the same political vision. There may be reactions, the atmosphere may be tense, “admitted the boss of French football in the Journal du Dimanche. Atmosphere.

How to watch the PSG vs Man United live stream

How to watch the Champions League: PSG vs Man United live stream

Final version of 1983 Volkswagen, which has been charged 140 thousand...

Weekly horoscope from August 31 to September 6