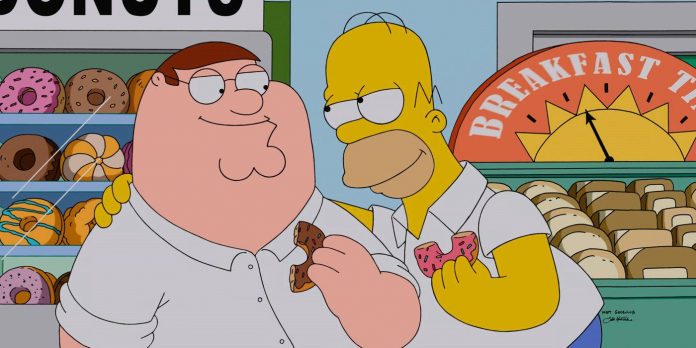 James Webb’s Space Telescope finds the Simpsons and Family Guy universes according to Fox’s Animation Domination joke. The Simpsons began the legacy of classic Fox Network animated shows back in 1989. Since then, the network has only increased its stable of favorite animated series with shows like “Family Guy,” “Bob’s Burgers,” and “The Great North,” among others.
But besides being part of the ever-changing Fox Animation Domination block, The Simpsons and their various successors have one more thing in common: they all take place in fictional locations that fans have long wanted to find on real maps. The Simpsons’ Springfield, of course, has the most generic name imaginable, which is part of the joke that this is a typical American city, but none of the real Springfields of America has ever been confirmed as the Simpsons’ Springfield. Similarly, Family Guy’s Quahog is not a real place, although in the series it is at least located in Rhode Island. The Great North is also set in the fictional town of Lone Moose, which is located in Alaska. The most mysterious of all, however, is the location of Bob’s Burgers in Seymour’s Bay, which has never actually been officially named, but simply how the voice actors of the show call the city where the action takes place.
By topic: Why the Simpsons’ Bad Reputation Can never be Fixed (despite the Improvement)
However, now, according to a joke tweeted by Fox’s Animation Domination, the real locations of the Simpsons’ Springfield, Family Guy’s Quahog, the Great North’s Lone Moose and Bob Burgers’ Seymour Bay have finally been determined. The joke, of course, is related to the recent release of images from the James Webb Space Telescope, which will use its infrared cameras to look deeper into the universe than ever before. Watch the funny astronomical tweet in the space below:
Here it is — the deepest and clearest infrared image of the universe to date: pic.twitter.com/8gUZaFo7wK
— Animation Dominance (@AniDom) July 13, 2022
Click here to view the original message
The long-awaited James Webb Space Telescope, orbiting at a distance of about 1 million miles from Earth, is expected to significantly advance the science of astronomy, as it looks not only into space, but also back in time to the earliest moments of the universe. Unfortunately, however, even this powerful tool is not strong enough to see Springfield, Quahog, Lone Moose and Seymour Bay, which exist in universes inaccessible to human sight. But Fox’s joke is nonetheless appreciated, as it pays homage to humanity’s latest powerful telescope while simultaneously nodding at the joke of animated shows set in fake locations that cannot be pinpointed on maps.
So, unfortunately, the James Webb Space Telescope hasn’t really solved the long-standing mystery of where the Simpsons’ Springfield actually is. But there’s certainly nothing wrong with a good joke combining science with people’s enduring love of Fox animated shows. And these fans will continue to get more of what they love, as new seasons of The Simpsons, Family Guy, The Great North and Bob’s Burgers will appear on Fox on September 25, 2022.