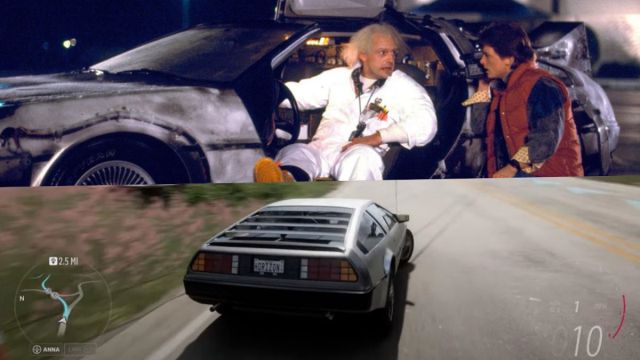 Forza Horizon 5: The mythical vehicle of the film directed by Richard Zemeckis comes to life once again, this time in the world of video games. Within weeks of the wheels burning the road, Forza Horizon 5 sets out to use the time machine. Traveling to another era is not possible in reality, but it is possible in the fictional universe of Back to the Future, the legendary film of the eighties, starring Michael J. Fox and Christopher Lloyd, among many others. Through the official video game account, Playground Games has revealed that the Delorean car can be driven in its title.

“Extremely excited to share that the dream of the eighties, the Delorean DMC-12, will be available in the first week of the Festival Playlist in Forza Horizon 5.” In this way, the vehicle will be released as one of the first DLCs. Of course, no one expects to use it to travel back in time. In this case, its functionality will be more traditional, so we will have to settle for getting behind the wheel of this extravagant car. The tweet is accompanied by a very short clip with the Delorean in full swing.

According to the study, on launch day users will be able to drive a total of 420 cars, as always carefully reproduced. Thanks to the power of the new generation of machines, the game will show off ray tracing effects on the different parts of the vehicles. In addition, it will present the most extensive open world of the saga, which will enjoy changing weather.

Forza Horizon 5 will be released on November 5 on Xbox One, Xbox Series X and Xbox Series S. Like other first party titles, Xbox Game Pass subscribers will have the possibility to enjoy the game from the same launch day. After the success of Forza Horizon 4, which also has adaptation to the new generation, the scene changes from the United Kingdom to Mexico. It will not include dubbing in Spanish from Spain, but will include the Mexican variety.

The release date of “The Legacy of Hogwarts” is scheduled for...