Home Entertainment Fortnite Reboot Rally Awards and How to Register 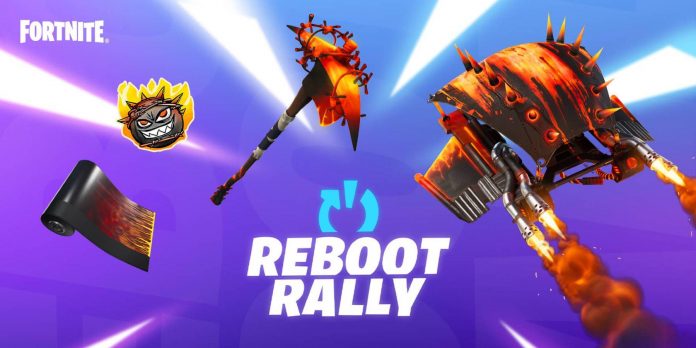 Fortnite has announced details about its latest Reboot Rally event, including the various rewards available and how to register other players. The new event is designed so that active Fortnite players can get either brand new players or those who have not played for a long time, with a hot set of cosmetics.

Reboot Rally begins at the beginning of the chrome-filled 3rd season of Fortnite Season 4. The new season presents a new threat in the form of an all-consuming chrome liquid radically altering several POIs. With various new items and mechanics on the island, players want to hire all the help they can get.

How to register for a Reboot Rally

As detailed in the post on the official Fortnite Reboot Rally website, it is available for any combination of new/returning and active players, but must include one new/returning. Fortnite defines an “active” player as someone who has played at least two hours out of the 30 preceding Chapter 3 of Season 4, and a “new/returning” player as someone who has played less than that time in the same time period. Active players can “rally” friends by sending them a QR code to join their group. After a suitable group is assembled, players can complete Reboot Rally quests and bonus goals together.

Players can team up with three or more friends (this is allowed by the game mode), and they do not need to complete quests with the same players. New and returning players can actually play with any Fortnite player on their friends list, regardless of active status or rally status, although rallying a friend earns extra points.

Awards for the Fortnite Reboot Rally

After Fortnite players have started completing Reboot Rally Quest tasks, they can spend the points they earned on fire-themed cosmetics:

The Fortnite Reboot Rally begins on September 19 at 9:00 am ET and ends on October 3, 2022 at 9:00 am ET. Squad mates can also help players complete some common quests, such as from the new Chapter 3 Season 4 battle pass featuring Spider-Gwen, which means getting friends together to dive into the new Fortnite season is probably a good idea.