Home Entertainment Fortnite: How to get weapons from “Star Wars” 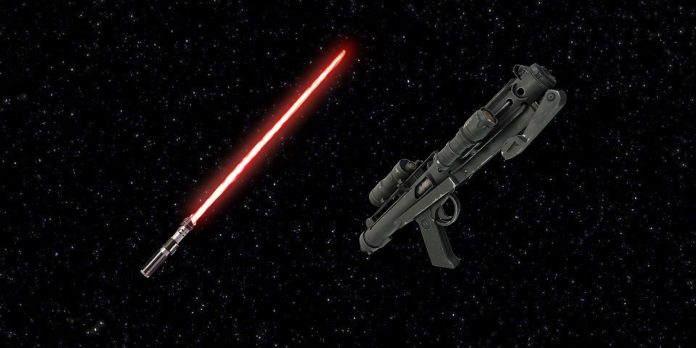 Even the most casual gamers probably know that Fortnite is the undisputed king when it comes to video game franchise crossovers. The free-to-play game has witnessed an incredibly wide range of collaborations, including things like professional sports leagues and luxury brands, but perhaps no more than Star Wars. This season is another collaboration between him and Fortnite, as a result of which several iconic weapons from a galaxy far, far away were brought to Fortnite Island.

The return of Star Wars content to Fortnite ends a hiatus in the franchise’s content that lasted only a few weeks. Both the lightsabers and the E-11 blaster rifle had previously returned to the map by Star Wars Day, May 4, and were delayed for several weeks after that. Obi-Wan Kenobi’s skin was also added, modeled after his appearance in the DIsney+ series of the same name.

How to get weapons from “Star Wars”

While in the previous Star Wars content, stormtroopers set up several checkpoints, Darth Vader himself now lands on the island. The infamous Sith Lord, who is also the last skin for the battle pass of the third season of Chapter 3, will arrive on a Lambda-class shuttle to a random place on the island marked with a red beacon and a blue beam of light.

In order for players to get Darth Vader’s lightsaber, they must defeat the Dark Side Force user himself. With a variety of powerful and long—range techniques, Vader is one of Fortnite’s most difficult bosses.

Further complicating the situation is a pair of loyal stormtroopers who arrive and guard Darth Vader. Defeating these stormtroopers is one of the few ways to get the E—11 blaster rifle, the other Star Wars weapon available.

The only other viable alternative is to sneak up to the shuttle’s location and open the Imperial Chest, although the task is a daunting task considering how easy it is to warn any of the villains. However, players are encouraged to try using the E-11 to defeat Vader, as the unlimited ammo of the weapon helps to reduce the huge health of the Sith lord.

Given that Darth Vader and his stormtroopers — and, consequently, all easily accessible Star Wars weapons — appear only in one place, obtaining these weapons will definitely become the subject of heated disputes between players.

However, Fortnite has just introduced a brand new original weapon that is a little easier to get. This weapon, dubbed Ripsaw Launcher, launches circular saw blades that tear apart buildings, perhaps even faster than Darth Vader’s lightsaber.