Home Entertainment Fortnite: How to get a Free Major Mancake skin 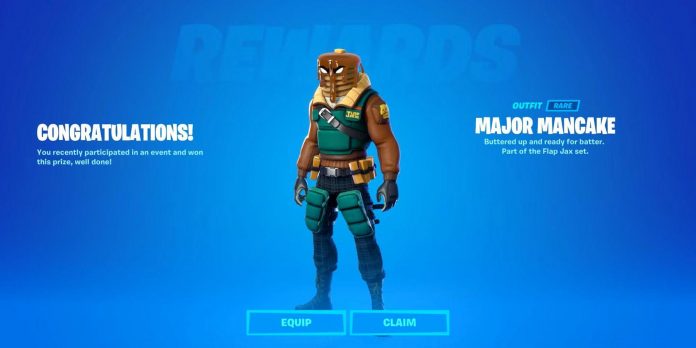 The Fortnite x Fall Guys crossover event has officially begun, giving players the opportunity to earn various free rewards. Among these awards are a new decoration on the back, a tool for harvesting and emotions, and there is even a special skin that fans can claim. In particular, players can earn Major Mancake Fortnite by participating in the event, which will last until July 21, and this guide contains complete information on how exactly this is done.

Fortnite: How to get a Major Mancake skin

The first step to getting a Major Mancake suit in Fortnite is to install Fall Guys on PC, PlayStation, Switch or Xbox. It is noteworthy that this multiplayer game became free on June 21, which means that it can now be obtained absolutely for free. However, PC players will need to go through the Epic Games Store to get the game, as it was removed from Steam after switching to the free model.

RELATED TO: Fortnite: Where to find a rocket launcher for fireworks

After installing Fall Guys, players must link the game to the Epic Games account they use to play Fortnite. To do this, fans of the Battle Royale should visit the Epic Games Store and use the relevant login information. Then players should hover the mouse pointer over their account name in the upper right corner, click “Account”, go to the “Connections” tab and click “Accounts” under the “Connections” heading. From there, players just need to connect to the platform on which they will play Fall Guys.

At the moment, fans are ready to jump into Fall Guys and start performing their Crown Clash tasks. Indeed, these tests are the key to unlocking the Major Mancake skin, and there are five of them in total. Fortunately, Crown Clash quests are extremely simple in their instructions, simply requiring players to play rounds in Fall Guys. Fans will need to complete 100 rounds to complete all these tasks, and shortly after that their cosmetic rewards should be delivered to Fortnite.

It should be noted that players will also receive some rewards in Rocket League for completing Crown Clash tasks in Fall Guys. These awards include a banner, a topper, wheels, a sticker and a rocket booster, and fans must once again confirm that they have everything correctly connected if they hope to receive them. While it’s true that not every Fortnite fan will be interested in these prizes, as their main focus may be on something else, they still provide an additional incentive to put some effort into solving problems.