Home Entertainment Fortnite: How to complete achievements on Rainbow Crossroads 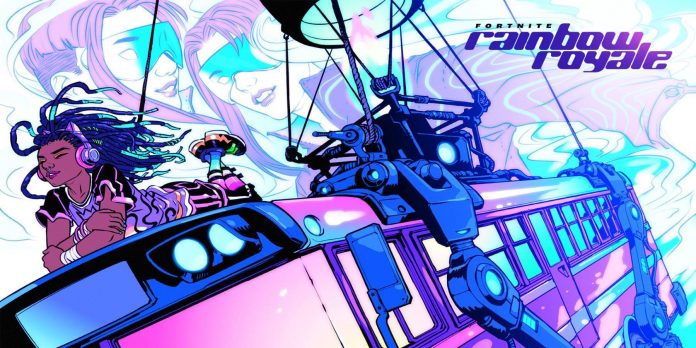 The latest event island in Fortnite celebrates the pride of LGBTQ+ and is called Rainbow Crossroads. Taking the form of floating clouds connected together with various elements, it offers a variety of activities for players. This includes a series of ten achievements listed right in the middle of the Intersection; here’s how to get them all.

The first task requires Fortnite players to complete the Rainbow Run. It’s not particularly difficult since there’s nothing to win; players just have to finish the course.

Rainbow Run can be accessed from a teleport near the center of the island, and it has the shape of a race track in the sky. Players will have to calculate the time of their jumps, but as long as they are careful, it is not difficult to complete the circle.

The next challenge requires a real competition, as players must win the game Whirly Jump. It is accessed from another teleport, and the game itself should be very familiar to anyone who has played Fall Guys.

Players stand on a circular platform and must jump and dive under electrified rotating pillars. Not as protracted as the recent Fortnite Strength Tournament, but it can still be troublesome.

The next test is another competition, but it’s the last one. Equipping with a particularly competitive skin is not required, but it can give the necessary confidence to win. The game takes place on several floating clouds with different colors and fruits on them. A color will be called every few seconds, and players must jump to the nearest platform of that color, as all other colors will disappear. The last player standing wins.

No more competition for the next challenge, just self-expression. Players must find one of the paint cans hanging on the map and throw the paint grenades obtained from it into the nearest empty white work of art. As Fortnite teases the Lord of the Rings crossover, this could be the perfect place for LoTR fan art.

It’s simple. Go past the Whirly Jump teleport and find the food truck. Buy food from him. That’s all. No bonus moves, no surprise Fortnite John Cena, nothing.

This is the longest, so be prepared. First go to the waterfall on the edge of the island, past the Whirly Jump teleport and the food truck. Go straight into it; there is a secret passage behind. This is the secret lair of the Dreamer, and she’s there, standing next to the portal.

Talk to her to find out that there are four artifacts on the island, then jump into the portal to return to the island.

The first artifact is located on the central promenade: this is the only chair among all the chaise lounges facing the podium (blue specks of dust also rise from it). Collect it and move on.

The second artifact is located in a diner on the west side of the island: it’s a purple box on one of the tables.

Then there is an artifact behind the general store in the northern part of the island (a building similar to three white circles): a “do not dance” sign.

The last artifact is located next to the observation deck on the east side of the island: a plastic T-Rex the size of a man. After collecting all four, you will receive a message that the Dreamer is waiting for the waterfall again. Talk to her to complete the quest and get the opportunity to buy the title of a Dreamer in the Style Store. It’s not quite a full-fledged costume like Starfire, but it’s a fun distraction nonetheless.

Go to the concert

Again, quite simple. There is a concert venue in the southwestern part of the island. Jump in and dance while the concert is going on, and that’s the whole challenge. Then we can only wait to see if the Fortnite Lady Gaga concert will become a reality.

Buy a title or a footprint

Go to the title store, which means just turning 180 degrees away from the task checklist board and running straight to it. Buy one of the names or trails, and that’s it. It’s a good time to unlock this Dreamer title earlier or get one that dates back to the recent Fortnite crossover Dragon Ball Z.

The Fortography studio is located through the teleport to the left of the title store. Jump into the booth and take a picture, and the task is completed. Most likely, it will not be available by the time the leaked Fortnite “Dead Game” skin is released, but if it is, such a photo will be very contrasting.

For the most recent challenge, head to the podium on the central boardwalk. There the Fashionista lives next to the podium. Talk to her and she will ask you to perform an emotion with a certain kind of costume (or maybe just a gothic one) at the end of the board.