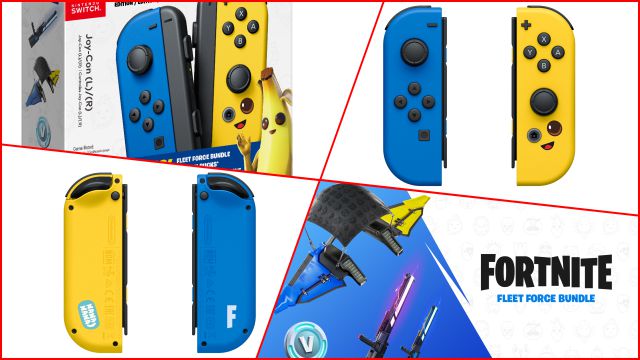 The controls will be blue and yellow and will include a download code with cosmetic elements for the game. They will arrive in Spain and America.

Nintendo has confirmed an agreement with Epic Games to distribute a new edition of the Forntite-based Nintendo Switch Joy-Con controllers. The popular video game, which premieres this Tuesday, March 16, Season 6 of Fortnite Chapter 2, will receive this new Joy-Con couple on June 4 in the main markets (both Europe and North America) in yellow and blue with some extras .

According to the first confirmed data, these are two officially licensed Fortnite controllers; as happened at the end of 2020 with the thematic console, whose colors for the Joy-Con were identical to those now protagonists, only with an inverted arrangement. The pack, whose price is pending to be confirmed, will include a yellow Joy-Con (right) and a blue Joy-Con (left), their corresponding Joy-Con Strap, 500 V-Bucks and a download code with cosmetic items for in-game.

The message in advance by Nintendo of America includes images of the added cosmetic content and more detailed images of the controllers. As we can see, the right yellow Joy-Con is based on the banana outfit; in fact, the character’s eyes and smile appear.

And be sure to drop into the new @FortniteGame Season starting tomorrow, March 16! pic.twitter.com/QgCiVGy5iW

How to download free Fortnite: Battle Royale on Nintendo Switch

Fortnite: Battle Royale is a free free-to-play video game (free with integrated purchases in the form of microtransactions and season passes) available on the Nintendo Switch eShop and the digital portals of PS4, PS5, Xbox One, Xbox Series X | S, PC via Epic Games Store and Android devices. We explain here how to download it on consoles and mobile phones.

Also, in this article we review the best free Nintendo Switch games today, where we include names such as the recent Apex Legends, Fallout Shelter, Super Kirby Clash, Dauntless, Rocket League, Warframe or Realm Royale.

You can find out here all the details of the patch 16.00 of Fortnite: Battle Royale, whose Season 6 of Chapter 2 (Instincts) has only just begun with a multitude of changes and news; including a single player experience.

Twitter is preparing to test the first paid feature option