Home Film News For those who are looking for something new to watch: the most... 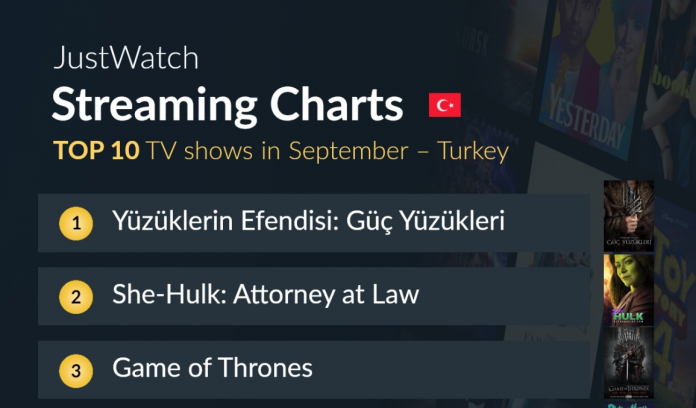 JustWatch, a company known for collecting data on popular online TV series and film platforms, announced the most watched TV series and films in Turkey last month. The published data show that in September, most of us watched the TV series “Rings of Power” and the movie “Everything is everywhere at the same time.” If there is a desire, let’s get acquainted with the voiced data together.
JustWatch data for the period from September 1 to September 30 once again shows that Netflix has not lost its dominance in the film and TV series industry. Amazon’s much-criticized series “The Lord of the Rings: Rings of Power” took first place in the list, despite criticism, and “The Hulk Woman,” one of the newest Disney+ series, was in second place. The wonderful Netflix movie “Everything and Everywhere at the same time” became the most watched movie.
The most popular TV series in Turkey last month
1.The Lord of the Rings: Rings of Power
2.She’s the Hulk: Sworn Attorney
3.Game of Thrones
4.Rick and Morty
5.Dahmer – Monster: The Jeffrey Dahmer Story
6.The Handmaid’s Tale
7.Better call Saul
8.Cyberpunk: Edge Runners
9.Welcome to Wrexham
10.The Sandman

The most popular movies in Turkey last month

1.Everything is everywhere at the same time
2.The Lord of the Rings: The Fellowship of the Ring
3.Athena
4.The Northerner
5.Spider-Man: There is no Coming home
6.Knives are drawn
7.Dune: A Desert planet
8.Pinocchio
9.Avatar
10.Before dawn