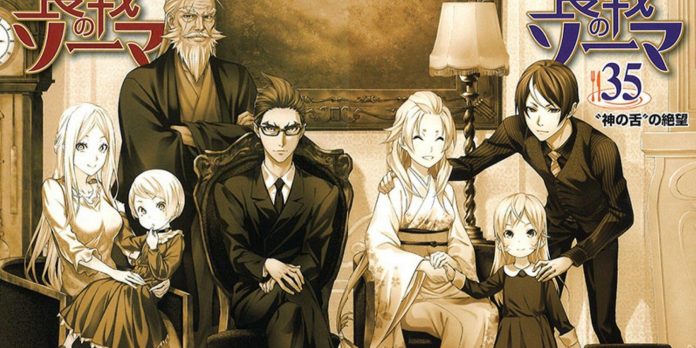 The Tōtsuki Academy is Japan’s most prestigious producer of culinary artists. At a young age, the students are trained by the finest chefs to withstand pressures in the kitchen, managing a restaurant, and overall become the best in the food world. Leading this elite school are the Nakiri family.

Armed with their own unique styles of cooking, the Nakiris are known for their high calibre of cooking. Food Wars! has shown each generation of the Nakiri family tree, from grandfather to grandchildren, and the greatness they all bring to the table.

Dubbed the “God Tongue”, Erina Nakiri was thrust into the world of food at a very young age. She possesses the world’s best tasting abilities, being able to accurately assess the quality of a dish. When her very special palate became garnered traction, chefs from all over the world sought after her feedback to improve their dishes. Erina tasted countless dishes, and provided thorough feedback. When she became a bit older, her father Azami forced very strict taste tests on her, even throwing dishes away that were not up to standard. Her only spark that ignited her light into the cooking world was Jōichirō Saiba, Sōma’s father. He made food fun for her, pressureless. She vowed to become a chef and became determined that he would taste her food one day.

Erina does not have a distinct cooking style. Her ability to create dishes that meet her own expert standards is a superpower in of itself. At Tōtsuki, Erina is a culinary star. As a first year, she is the youngest member in history of the Council of Ten, the Academy’s highest ranking student body consisting of the best chefs in the school. She judged the Entrance Exam for new students, which introduced her to Sōma and his improvised style of cooking, to which she described his food as “disgusting!!!”, despite being literally rendered weak in the knees in a fever of deliciousness. Since then, Sōma and Erina have developed a rivalry of some sort that evolved into a friendship, where she discovers more of who she is as a person and a chef, away from her Nakiri name.

Also a first-year at Tōtsuki Academy, Alice is Erina’s cousin on her mother’s side. She was very close to Erina and wanted to be revered in the culinary arts just like her, so much so that she traveled to her mother’s home country of Denmark to study food.

Alice’s specialty is molecular gastronomy. She has been trained in using the most cutting-edge technology in her cooking to play to the senses and enhance the dining experience. Alice will turn rotis into lollipops, make milkshakes that look like hard-boiled eggs and a curry that is hot and cold using all kinds of new techniques and tech.

Alice and Erina have sisterly rivalry throughout their lives, which has grown their talents in a way. Alice eventually becomes the sixth seat on the Council of Ten.

Senzaemon is the fearless Director of Tōtsuki Academy, and Erina’s grandfather. He is well respected in his position. Being infamously hard to please, he ensures that Tōtsuki’s calibre of students is very high. He is probably most famous for a dish being so delicious that he magically disrobes while tasting, a power all the Nakiris have. He practices no favoritism, critizing both Erina and Alice equally with the other students. All that matters to him is that the art of cooking is respected.

He is protective over his family, especially Erina. When he learned that her father was overworking her tasting abilities as a child, he immediately intervened. Azami was exiled from the family, never to return, until he plotted a way to usurp Senzaemon from his Director position, which was sadly successful.

Azami Nakiri is Erina’s father and Senzaemon’s son-in-law. A former third seat on the Council of Ten, Azami is a cooking genius in his own right. After he was shunned from the family for his cruel antics against Erina, he returned years later and usurped his father-in-law as the new Director of Tōtsuki. He lead in a dictator style, not caring what his fellow staff thought of his new way of teaching.

Students were permitted to learn dishes approved by a group he established called “Central”, which included six out of ten members of the Council of Ten. All clubs, seminars and societies were also disbanded. His reign of terror eventually ended, and Erina became the new Director of Tōtsuki.

Mana Nakiri is Erina’s mother. Although she is not a prominent figure in the anime, Mana has left quite an impression on Erina. Mana also has a God Tongue, but this proved to be a hindrance to her. Nothing she ate satisfied her, to the point where smells would put her off. She ultimately became forced to sustain herself on nutrient supplements, which left her feeling very depressed. Eventually, she left home and Erina to cure herself.

Mana was absent from most of Erina’s life, even when Azami cruelly put her through all those taste testings. Erina grew up to resent her mother’s absence, this especially shows in the BLUE arc. Mana is now the bookmaster of the WGO. Her relationship with Erina seems to be somewhat repaired.

The illegitimate son of Azami and an unnamed American woman, Asahi is Erina’s half-brother. Unbeknownst to her, Asahi infiltrated Tōtsuki as a substitute teacher under the alias Suzuki. He became a skilled cook at the orphanage he grew up in, under Jōichirō’s tutelage in a charity program.

Asahi became a member of Les Cuisiniers Noirs, an underground group of chefs who compete for culinary glory across the world. Asahi has been undefeated. His intention was to woo Erina and make her his. After the ferocious BLUE competition, Erina eventually accepted Asahi as a member of the Nakiri family.

His style rivals that of Jōichirō, when he beat him in a food war. He also managed to impress Mana Nakiri, despite her aversion to most dishes she eats. His signature technique is called the Cross Knives, which absorbs the soul of the tools he uses to cook when he wins them from other chefs. This means he can adapt to any food war scenario, making him a serious threat in the kitchen.