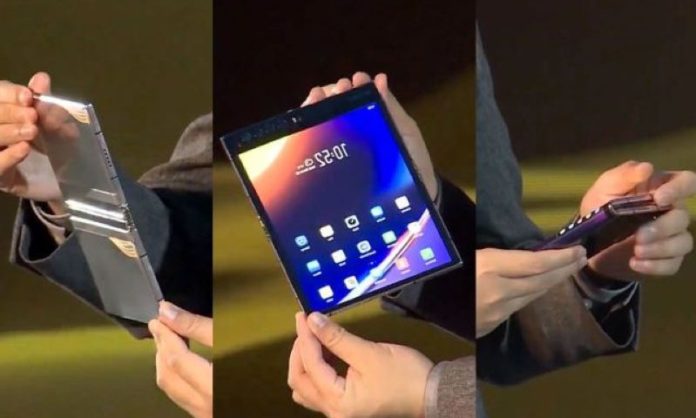 Royole, which passed the giant companies of the market such as Samsung and Huawei and introduced the world’s first foldable screen phone in November 2018, came up with the new generation of FlexPai after a wait of about a year and a half.

The Chinese brand, which shared some of the technical features of FlexPai 2 in the event that it announced the new screen named Cicada Wing, aims to become a more assertive position in the foldable phone market, where the wind has not blown hard yet.

The design of Royole FlexPai 2
Speaking at the event, Royole co-founder and CEO Bill Liu said FlexPai 2 has a 7.8-inch AMOLED display that can be turned off like a book. Indicating that this panel made of flexible plastic offers 1440p resolution, Liu emphasized that they made significant improvements in the user experience.

Royole says the screen of FlexPai 2 is made of flexible plastic
According to Liu’s information, FlexPai 2 will draw its power from Snapcommgon 865, Qualcomm’s latest processor. The foldable screen smartphone, which is announced to be equipped with the Kyro 585 processor, high speed LPDDR5 RAM and 5G for nine different bands covering regions such as the USA, Europe and China, with a mechanically approved hinge, with a thinner and lighter design than the first generation. the future.

After the introduction of FlexPai with the title of the world’s first foldable smartphone, many models such as Motorola Razr, Samsung Galaxy Fold and Z-Flip and Huawei Mate XS started to appear in the market. Lost among the mainstream brands, Royole wants to remind himself of FlexPai 2, which promises superior performance and design.