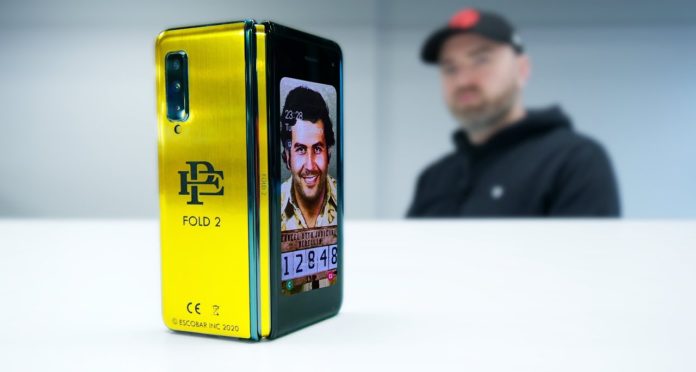 Escobar Fold 2, the second phone of Roberto Escobar’s company, actually turned out to be a modified Samsung Galaxy Fold. This situation, revealed through a YouTuber, reveals that Escobar Fold 2 is a scam.

The brother of Pablo Escobar, one of the biggest drug barons in the world, has been able to cover our news for a while. Having launched a phone called “Escobar Fold 2” in recent years, Escobar manages to stay on the agenda with the price and technical features of his phone. Now a YouTuber has uncovered all the footage of Escobar Fold 2.

In terms of design, Escobar Fold 2 looked a lot like Samsung’s first folded screen phone, Galaxy Fold. In fact, this suggested that Escobar Fold 2 was actually a make-up version of the Galaxy Fold. But the YouTuber’s video in question reveals that this idea is actually real and Roberto Escobar hardly ever struggles for this phone.

The video, prepared by YouTuber Marques Brownlee, reveals that a simple coating process is applied to the Samsung Galaxy Fold. Because YouTuber, who has removed the coating in question, shows that Samsung clearly wrote on the phone’s case after the coating came off. Making a statement on the subject, YouTuber suggests that this is a scam and brother Escobar only sends orders to famous names like YouTuber.

Brownlee’s claims are not limited to Escobar Fold 2’s scam. YouTuber says that Roberto Escobar has contracted a private company for this phone, that the company made commercials for Escobar Fold 2 with famous names, and as a result, this phone was advertised. YouTuber adds that no one should order this phone.

In fact, Escobar Fold 2 is not the first trick for the company Escobar. The company has also appeared before consumers with a smartphone model called Escobar Fold 1. This phone was a make-up version of the world’s first foldable screen phone, Royole FlexPai. So Roberto Escobar had signed under a similar scandal in recent years.

That video of the footage of Escobar Fold 2

Huawei AppGallery is available with its new interface

Alphabet Tests Robots For Mundane Tasks In Their Offices