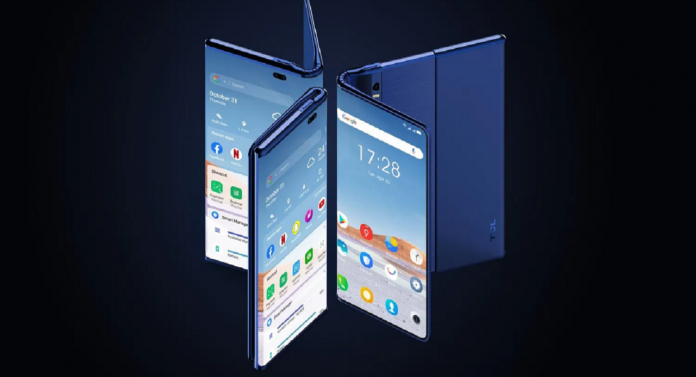 Fold n ‘Roll, Chinese smartphone manufacturer TCL, was officially introduced with the TCL 20L, 20L Plus and 20 Pro 5G models at the event held today. Although the TCL 20 series introduced by the company was at the forefront at the launch, all eyes were on the company’s concept phone Fold n ‘Roll.

The device, which has both an extensible and foldable design in terms of its structure, is defined as a three-in-one smartphone. The device, which is both a smartphone, a tablet and a Phablet, is one of the company’s biggest projects.

TCL has previously obtained many patents for Fold n ‘Roll.

It turned out that the company has previously received many patents for the Fold n ‘Roll model. The Chinese company produces its own display panels as well as smartphones. TCL, which also has an important place in the smart TV market, wants to reflect the same success to the smart phone market.

TCL Fold n ‘Roll has a screen size of 6.87 inches in phone form, 8.85 inches in phablet form, and 10 inches in tablet form. To put it briefly, the phone, where three different modes are combined in a single device, has a very innovative design.

TCL announced that the Fold n ‘Roll model, whose design is highly appreciated by the users, is a concept device. This means that the smartphone will not go on sale anytime soon. It should be noted that if smartphones with this type of design go on sale, the price tags will also be at very high levels.

TCL, which has started to give importance to the smartphone market in recent years, will launch its first foldable phone towards the end of this year. The company did not provide any information about when the Fold n ‘Roll model will go on sale.

Galaxy Note 20 Plus may have extra sensor to correct focus...