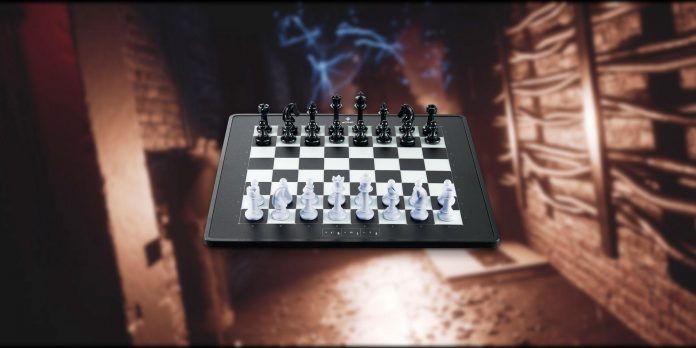 To get the Grandmaster achievement, players need to find a missing chess piece at the Phobia – Saint Dinfna Hotel. Fobia – St. Dinfna Hotel is an indie first—person shooter with elements of survival horror. Players control Roberto, a journalist who unravels the secrets of this dark, mysterious hotel. The hotel is not what it seems; Roberto has to enter the hotel at different time periods to find a way out. Throughout the hotel, players find items and solve puzzles to advance in the game.
There are many floors in the hotel, along which players move in search of items. To solve the chess puzzle, which is located on the seventh floor, a figure from the ninth floor is required. Many puzzles are arranged this way; players can find an item at the beginning of the game by solving one puzzle, and eventually this item will come in handy for a later puzzle. There is no linear exploration in the Fobia – St. Dinfna hotel; players will constantly go up and down the floors, trying to solve puzzles, kill enemies and survive in the unknown.
Link: The next Dream Daddy Devs game is a psychological horror for survival
To solve the chess puzzle, players first need to find the chess piece of the White Queen on the ninth floor. Then the players have to go to the seventh floor and play chess. Once a certain pawn is defeated, the chess puzzle will be solved and the players will receive the grandmaster achievement.
How to solve a chess puzzle in Fobia – St. Dinfna Hotel
Go to the ninth floor first. Players will need a chess piece of the White Queen, which is locked behind the gate on the mezzanine. The mezzanine on the ninth floor has two sides under investigation, and both doors are locked. Go to the right side of the mezzanine and there will be a white ornate box on the table. Inside is the key to mezzanine 1; take it and go to the other side of the floor. Open the gate of the mezzanine 1. On the left in this room there is a small red box, which contains the figure of the White Queen, necessary to achieve the puzzle “Chess”.
Go down the stairs to the seventh floor. In the corridor there will be chess on a white cabinet with some kind of locking mechanism. To get the grandmaster achievement, players need to take the black pawn sitting on F7. Move the shapes in the following order:
Pawn on E4. Move the pawn, the fifth from the left, two squares up on E4. The black pawn opposite will copy the move. Elephant on C4. Move the bishop to the right of the queen diagonally to C4; do not move until the end of the chessboard; it must be on the same line with the white pawn from the last move. The black knight will move to C6. The Queen to F3. Move the queen diagonally two squares to the right so that it is southeast of the white pawn. The black elephant will move in front of the white elephant. Queen to F7. Move the queen straight forward to take the black pawn. Players will collect a pawn, and the mechanism will be unlocked.
Once this series of moves is completed, the players have completed the chess puzzle and received the Grandmaster achievement.