Home Sport Florentino: “Madrid is in a process of transformation” 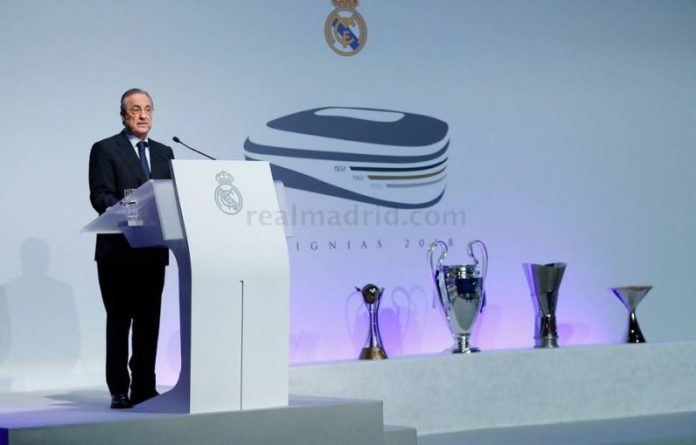 Florentino Perez is one of the most relevant characters in the world of football. When pronounced in public, everyone stops to listen. In the delivery of badges to the members of Real Madrid, in Ifema, the top leader delivered a speech in which he reviewed the news of the club he directs.

“Being a member of Madrid is a privilege, but also a huge responsibility, we have the obligation to transmit this legacy. Values ​​such as teamwork, respect, permanent improvement, solidarity … Values ​​that have been transmitted through you , generated after generation. Being from Real Madrid is a way of understanding life, “said the president.

Review of white news
About the current situation of the capital of Spain, which is in full struggle for the Santander League and the Champions League, Perez wanted to praise and bring up the values ​​of the Madrid team.

“We have experienced one of the best stages in our history, in football the myth has grown with four European Cups, we continue to lead the UEFA ranking for the sixth year in a row. We have to be aware of what this means in an international context every time more difficult The team has been renewed with additions, we have all the hopes placed in these players We are in a process of transformation that will lead us to new titles And we have a squad with players from our quarry, who carry in their DNA the identity of the club, “he said.

“In basketball, 17 titles have been won in eight seasons, including two European Cups. In each game the team transmits the values ​​of Madrid. What we have lived in both disciplines is unforgettable, I would say almost unrepeatable, but we are Madrid , we are forced to try what seems impossible.

That’s how we are, and that’s how they instilled in us the culture of self-demand. Today we remember indispensable figures, such as our beloved President Bernabeu, Di Stefano or our President of Honor, Paco Gento, who cannot accompany us but who sends you a warm hug to all those honored (he has recently been hospitalized).

And to continue building this recognition, the unity of all partners has been necessary. I always say that our strength is unity, it has allowed us to be leaders, “he continued.

Real Madrid, the most valuable club and brand in the world
Another of the issues that Florentino Perez also reviewed in his speech was the high valuation and prestige that Real Madrid has in the world, not only football, but at all levels, since several publications such as Forbes, place him at the head of the teams.

“We live an institutional stability that allows us to address the needs and make the necessary self-criticism so as not to fall into self-complacency. We have endowed the club with a modern and effective organization that keeps us leaders among the best clubs in the world. We are the most valuable club in world, according to Forbes and the most valuable brand in the world, for Brand Finance.

A universal club, whose owners are its members, proud of our heritage, with exemplary facilities. What began as a dream today is the best and most modern sports center in the world. And now we want the Bernabeu to be the best stadium in the world, the great stadium of the 21st century. It will be an architectural reference, with the latest technology, an essential source of income for Real Madrid. It will be the pride of the city of Madrid.

We live what is Madrid with emotion and passion. We love this shield and this shirt for what they represent. We are proud of what we have achieved on the pitch and also for what we give to society. We have a commitment to those who suffer most.

The Real Madrid Foundation is present in 100 countries, has covered more than one million people and every year we make more than 1,000 socio-sports projects.

Dear partners and dear friends, I reiterate my congratulations and thanks for all that you have given to Madrid in your lives. You have been protagonists of unique experiences, you are in charge of continuing to build this story. These badges are the symbol of what it means to be the club of the 23 European Cups. Congratulations and thank you very much, ”he concluded.

Cowboys have made an official decision on Tyrone Smith: what is...

Charles Leclerc and Max Verstappen will start at the end of...