Home Celebrity Florence Pugh put on a cute cape, and then showed off another... 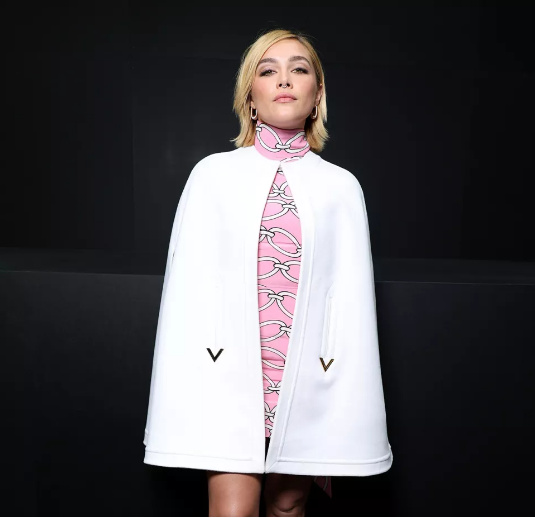 It’s been a few months since Florence Pugh blew up the Internet with a transparent dress at a fashion show in Rome. At the time, she supported Valentino while wearing the now infamous pink number, and the image later exploded after trolls started commenting that they could see her nipples. Well, Paris Fashion Week has just passed, and Pugh has returned to it, supporting the fashion house first with a funny cape, and then with another transparent evening outfit.

Heading to the Valentino Spring/Summer 2023 women’s clothing show last weekend, the star stepped out in pink and white. The first one in particular seems to really be her color, as Pugh has rocked pink many times for events in the Barbiecore era, including the previously mentioned Valentino show. In Paris, her short dress and beautiful cape were complemented by massive shoes with short socks.

The star was also caught during the 7th day of Paris Fashion Week in a separate Valentino dress, which she wore to a dinner in honor of the fashion house. She shared this look on her Instagram, captioning the post “Trust the button” and using the hashtag Valentino. This look was a perfect parallel to the “free the fucking nipple” dress she wore just a few months ago.

At the end of Fashion Week, Pugh also called the weekend “special” and wrote to Maison Valentino: “It’s always nice.” She also shared a separate video in her Instagram stories showing how she walks in this image.

While the dresses she wore at Fashion Week were just as transparent, this two-piece look came and went with a little less negative reaction. In fact, the previous dress went viral after Pugh joked that “technically they’re closed” on her social media, which may have led to some people becoming more vocal about their thoughts. Later, Pugh told how the negativity affected her. Good news? Many people sympathized, and other big names, such as Jessica Chastain, spoke out in support of the actress.

It seems that a naked dress has some kind of endurance. Nicole Kidman rocked a nude dress. Similarly, Megan Fox wore a transparent number on VMA. Even at Paris Fashion Week, Bella Hadid walked the catwalk in full attire and attracted attention with a separate dusting dress. But Florence Pugh still has a right in this market, thanks to her high-class collaboration.

Nabilla responds for surgery “I did not wear a prosthesis”!