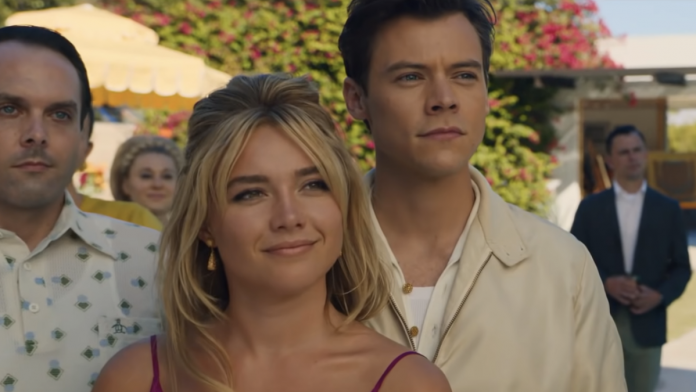 Olivia Wilde’s new film “Don’t Worry, Darling” has become the subject of a number of scandalous rumors. With rumors about how the director met Styles, as well as the alleged feud between Florence Pugh and Wilde off-set, this behind-the-scenes hype is definitely drawing a lot of attention to the new film. The latest speculation going around was that Florence Pugh supposedly earns a lot less money than Harry Styles for “Don’t Worry, Honey.”

It’s no secret that men and women are constantly fighting for equal pay for joint film projects. According to Showbiz Galore, Florence Pugh, a professional actress since 2014, allegedly received a salary of $700,000 for the film “Don’t Worry, Darling.” Her co-star, whose new role in the film marks his second acting career, was reportedly paid $2.5 million-if true, a much larger amount of money than his co-star in the film.

It should be noted that this is even more than other famous colleagues in the film, such as Chris Pine, who reportedly earned $ 600,000.

If that’s true, maybe these numbers might have something to do with how valuable a pop star like Stiles’ time is. The singer still tours regularly, and his efforts are well paid; previous reports indicated that Harry Styles, a former member of one of the most successful British boy bands, has a net worth of $ 90 million, while Pugh’s fortune is about $ 8 million.

Despite this, Olivia Wilde denies the pay disparity of her actors. The director of Booksmart told Variety that she found the reports of a pay gap “unfounded” because the right to equal pay was something she had been fighting for for more than “20 years.”

There was a lot of stuff there that I mostly don’t pay attention to. But the absurdity of the invented clickbait and the subsequent reaction to the non-existent difference in payment between our main and secondary actors upset me very much. I am a woman who has been working in this business for more than 20 years, and this is what I fought for myself and others, especially as a director. There is absolutely no basis in these claims.

This is enough to ask how well-founded countless rumors can be considered. And Don’t Worry Darling has been the center of a number of rumors. The timeline was reportedly called into question after Olivia Wilde and Harry Style got together on set around the time of her breakup with Jason Sudeikis.

Then it was reported that the time she spent with the One Direction star on set caused a split between the Black Widow actress and Wilde. Pugh talked a lot about working with Styles on the film “Don’t Worry, Honey,” but he spoke more quietly about working with Wilde, despite the fact that Wilde had recently been delighted with her.

Fuel was added to the fire when the actress of “Little Women” responded to people obsessed with sex scenes with Harry Styles. She believed that the film should not be defined by these scenes and that “the people who made it are bigger and better.” Could this be a blow to Olivia Wilde, reigniting rumors of a feud?

Olivia Wilde and Harry Styles said they experienced “toxic negativity” because of the idea that the director and the actor are together, as well as because of their 10-year age difference. He said he had no intention of hurting anyone and felt sorry for the leading women in his life for facing any online criticism. The Dom actress has previously spoken about the “false narrative” behind her new relationship with Stiles and that she is trying to focus more on the happiness between her and her new beau, instead of caring about what others think about them.

While Wilde commented, rumors of a pay gap continue, but in the end, it’s safe to say that “Don’t Worry, Honey” was noisy. Get ready to see a movie that attracts a lot of attention, as the 2022 movie will be released in theaters on September 23.

PlatinumGames On The Future Of Bayonetta: “If There Is Interest There...