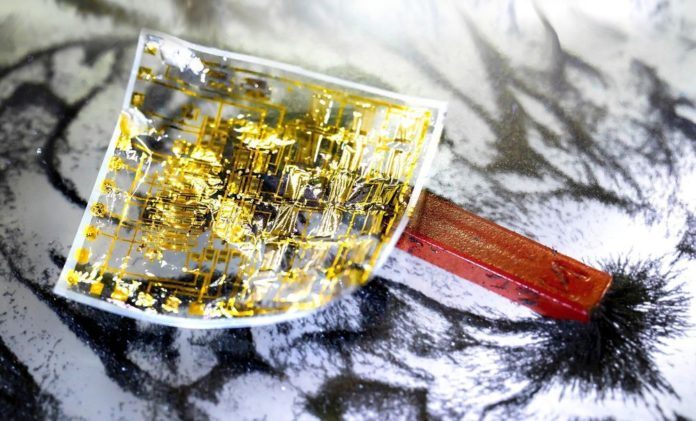 Scientists from Germany and Japan managed to develop a flexible electronic structure consisting of organic circuits and magnetic sensors. The structure, which is very sensitive in terms of functionality; It is also very durable for bending, twisting and folding.

Our skin provides us an advantage in many points with its highly compatible and flexible structure. Scientists even want to transfer electronic circuits to the skin and create a structure similar to the nervous system in their studies on robotic technologies to take advantage of these advantages. This is particularly important for humanoid robots, but science is not exactly at the desired point.

Scientists’ sole purpose is not to build electronic systems on leather and leather-like structures. Researchers want to create flexible circuits and open a new page in robotic technologies with their work. Finally, in a study involving scientists from Germany and Japan, a flexible electronic structure consisting of magnetic sensors and organic circuits was developed.

Newly developed flexible electronic structure can open a new page in robotic technologies
The photo above shows the impressive structure developed by scientists. The structure, which is equipped with flexible and yellow lines in the visual, is actually an electronic circuit that is the harbinger of a new technology for robotic systems. Scientists are controlling magnetic field through the sensors they add on this electronic structure.

The flexible structure of the real skin is connected by numerous nerve endings in its lower layers. This was a huge obstacle for scientists. Because it is not an easy thing to prepare an artificial leather and put some circuits in the prepared structure. Also, while doing these things, the cables had to be eliminated because the aim was to create an electronic system, just like nerves under the skin.

Scientists have used organic signal amplifiers and organic thin film transistors to achieve their goals. The scientists, who combined the circuit elements in their hands, then integrated this circuit on a thin structure, ensuring that the entire circuit remains in one piece. Thus, the ultimate goal was achieved.

The developed flexible structure can make very precise measurements thanks to its magnetic sensors. Scientists can also detect the magnetic field distribution instantly through this electronic structure. This special structure is extremely resistant to impacts such as bending, stretching and folding in design. Scientists are now continuing their research to advance this important step and work on more advanced projects.