Home Entertainment Flash: The appearance of Batman Knightmare may put an end to Snyder’s... 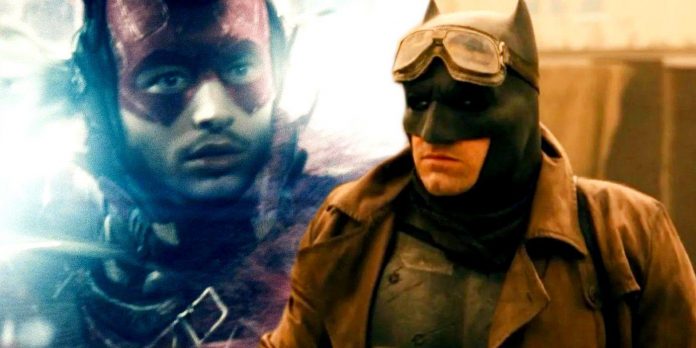 Although Ben Affleck’s Batman has been confirmed to play a role in The Flash, the appearance of the Dark Knight in the Knightmare version could put an end to Zack’s vision. ​​​​Snyder regarding the DCEU and Bruce Wayne himself. Although Warner Bros. Moved away from the future created by Zack Snyder’s “Justice League,” the upcoming Ezra Miller-starring “Scarlet Speedster” may provide some closure before Barry Allen reboots the timeline, as rumored. Similarly, Barry’s encounter with Batman Knightmare could be the perfect way to say goodbye to the Snyder era in the DCEU.

First featured in Snyder’s Batman v Superman: Dawn of Justice, Bruce Wayne dreamed of a future in which Darkseid took over the world and corrupted Superman, turning the Earth into an apocalyptic wasteland. Dubbed the “Knight Sequence”, Batman wears a jacket, scarf and glasses to protect him from the harsh elements, leads soldiers against the Parademons before being killed by the Man of Steel himself. In addition, Zack Snyder’s “Justice League” showed a return to the future of Knightmare, which could be the backdrop for the sequels of Snyder’s “Justice League”. However, it doesn’t look like that future will ever come, as Warner Bros. pretty much breaking up with Snyder.

Due to rumors that The Flash will give the DCEU a soft reboot, it seems that Snyder’s vision will really disappear once Barry Allen resets the timeline and creates a new reality (with Michael Keaton’s Batman being teased as the new Dark Knight of the DCEU going forward). Thus, it would certainly be important if Ben Affleck’s role in The Flash was Batman Knight. Barry Allen could have met this version of the Dark Knight, which would probably have prompted The Flash to reset the timeline, preventing a destructive future that was also assumed to be Batman’s fault. While this would not have been the original plan conceived by Zack Snyder, it would at least have put an end to the era, and would also have served as a worthy send-off for Affleck taking on the Dark Knight.

It should be noted that there will still be many plot threads and teasers that will remain unresolved (for example, Barry going back in time in Batman v Superman to warn Bruce). However, seeing Batman Knight one last time would certainly be a dynamic way to end this DCEU era, which certainly had its heavy spots. After the less-than-stellar box office of Justice League 2017 due to producer interference and large-scale reshoots that were not the work of Snyder, Warner Bros. constantly abandons what was supposed to be their crown jewel and DC’s flagship. The movie (except for Zack’s “Justice League” ​​​​Snyder in 2021, which got the green light to encourage viewers to subscribe to HBO Max).

While Snyder’s DC movies are about to become irrelevant after “The Flash,” Warner Bros. He can still pay homage to what he hoped to achieve and to fans of that era thanks to Ben Affleck’s Batman. Performing the same role as Thomas Wayne in the original “Flashpoint” comic book storyline, the Knight Batman can help The Flash reset the timeline so that the darkness of his reality ceases to exist. In any case, the hope is that the current DCEU Batman will get a proper send-off in The Flash before he is apparently replaced by Batman Burton.

Black Boxes In Horizon Forbidden West: Where To Find Them All