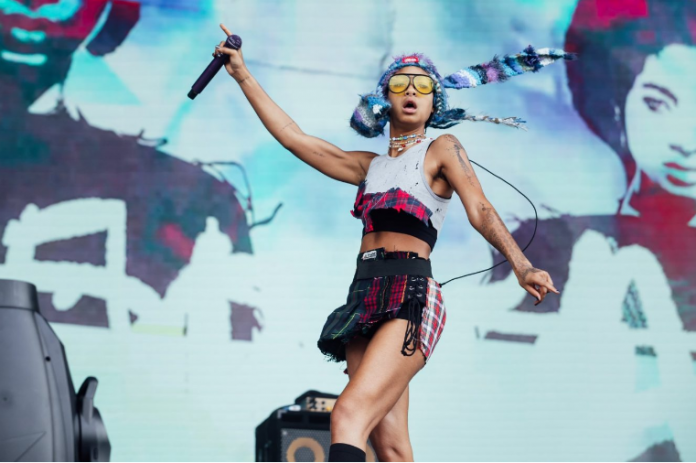 The artist from Los Angeles talks about her new album “COPINGMECHANISM”, “Reading & Leeds” and his debut novel

It’s been a little over a year since WILLOW released her critically acclaimed fourth album, “Lately I Feel Everything,” which helped to revive pop punk with songs like “Grow” and “Gaslight,” and which featured Travis Barker and Avril Lavigne. . Not wanting to lose momentum, the 21-year-old quickly returned with the crushing splendor of her new LP “<COPINGMECHANISM>” (out October 7).

When asked by NME if she feels that she has a creative upswing, WILLOW answers: “I really feel it. After “Lately I Feel Everything” I told myself that I wasn’t going to make another album for a while. Even when I got [into the studio] with Chris [Gratty, the producer], I was still telling him I wasn’t going to make an album. But slowly but surely it has become a very strong project.”

To find out about the latest news from NME’s In Conversation series, we met WILLOW in London to discuss her new album, dream collaborators, her debut novel and more. Here’s what we learned.

WILLOW has had the idea of “<COPINGMECHANISM>” for some time.

“<COPINGMECHANISM>” may appear just 14 months after the release of WILLOW’s latest album, but its origins go much further than can be assumed from the rapid continuation. “I was always looking through old notes on my phone, and I had a folder called “Coping Mechanism,”” she explains. When the star looked at the date on the folder, which at that time had only three songs, she realized that she had started it back in 2018: “This idea has been with me for a long time.”

The inspiration to resume working in this folder, however, came not so long ago, and discovered that WILLOW was doing something she thought she would never do. “I hate to say this because when I was writing music when I was younger, I really wanted to stay away from thoughts of heartbreak and romantic love,” she says with a wry smile. “I felt like it was so played out. I just felt like everyone was talking about it and it was just boring. But then your girlfriend got her heart broken. And you know what, I said, “Maybe it’s time for me to make this album.” This is the album.”

She can finally create the metal music she’s always wanted to do.

WILLOW has often talked about her love of metal and her desire to play with this genre. On “COPINGMECHANISM>” she finally gets her chance: songs like “Perfectly Not Close To Me” (featuring Yves Tumor) show how she turns her vocals into a scream, while the record is filled with a lot of harsh, heavy guitar riffs. . She says that entering this zone on this album made sense thanks to her producer Chris Greatty.

“Gratty plays guitar like a fucking titan,— WILLOW explains. “He just plays like he’s in music. I feel like the music he likes to play the most is metal, and that’s his forte. We just worked really well together. I wanted to do it, and he was like, “Oh, I know how to do it — in which direction should we move?”

Although WILLOW says she was “so comfortable” working in this area with Greatti, she notes that metal is “not my strong suit”: “I can play some metal riffs, I can. But that’s not what I do best. I would like it to be, and it may be soon.”

This album may not be the last time we hear a young artist experimenting with metal sounds. “Oh, 100 percent,” WILLOW replies when asked if she feels she still has something to explore in this genre. “In fact, last year I played a lot of seven-string [guitar], I was super, super-strong. I need to get back to that because once you do something, you really get better pretty quickly. So it just requires commitment.”

There are many more music legends WILLOW wants to work with.

Take a look at WILLOW’s discography and you’ll notice an impressive list of true music legends in her collaborations. The aforementioned “Lately I Feel Everything” featured Blink-182 drummer Barker and pop-punk queen Avril Lavigne, and over the years she has also teamed up with Machine Gun Kelly, Nicki Minaj, Camila Cabello and others.

As impressive as this list is, WILLOW hasn’t finished working with her heroes yet. “Oh my God,” she begins, scrolling through her list of employees in her head. “I want to work with Les Claypool from Primus. I also want to work with Hiatus Kaiyote’s soloist, Nai Palm: she’s great. There are so many people I want to work with, the list can be endless.”

What, then, is WILLOW looking for in co-authors? “Someone who is willing to experiment and do things that other people don’t like,” she says. “And I’m just looking for a friend. Like, if I really love you and you inspire me as a person, I feel bad. I like working with people I love—that’s really the only criterion.”

After the speech in Reading & Leeds WILLOW is now targeting some other milestones of British festivals.

WILLOW debuted in Reading & Leeds back in August, having staged an incendiary performance on the main stage of the festival. “It was so crazy,” she says, recalling the weekend. “There were a lot of people there. I honestly thought, “What’s going on?!” It was so much fun, and I performed some new songs there — I felt like the reaction to them was better than I could have imagined, and I’m just really grateful.”

The history of R&L has not gone unnoticed by the Los Angeles star. After all, WILLOW says she has always enjoyed performing in Europe and the UK. “The way people consume music in the UK is just different,” she explains. “I think people in the UK care a little more about the quality of the music, not just how it looks [compared to the US].”

Performance on the main stage Reading & Leeds is an important milestone for any artist, but WILLOW hasn’t finished celebrating great achievements on this side of the pond yet. “I would love to play at Glastonbury,” she grins. “It would be amazing, it would mean the whole world. I like being a part of historical movements and music, it’s so cool for me. It’s just an honor to be involved.”

Her debut novel will “examine how people lived in the past.”

WILLOW may be busy with music, but she has also found time to work on a completely different creative venture—her debut book. Co-written with Jess Hendel, The Black Shield Maiden will be published on October 4 and will be the first book in a new fantasy series. The novel and the following “will make visible the stories and mythologies of medieval African peoples and women of the Viking age, which have been erased by the dominant Western narratives in the media and education.”

“I’m just a nerd,” explains the musician, where this idea came from. “I love history and I like to analyze the interaction of people. In fact, I love prehistoric, egalitarian human societies and how they decided to gather, unite into tribes and communicate with each other. It’s very, very interesting to me.”

As for the time period in which the action of the “Black Shield Bearer” takes place, she notes that it is not “so far in history”: “But the bottom line is that I just want this book to look at how people lived in the past to inform our future and teach us what our ancestors did, which can make our lives a little less empty in the 21st century.”

How to Unlock Aladdin in the Disney Mirrorverse