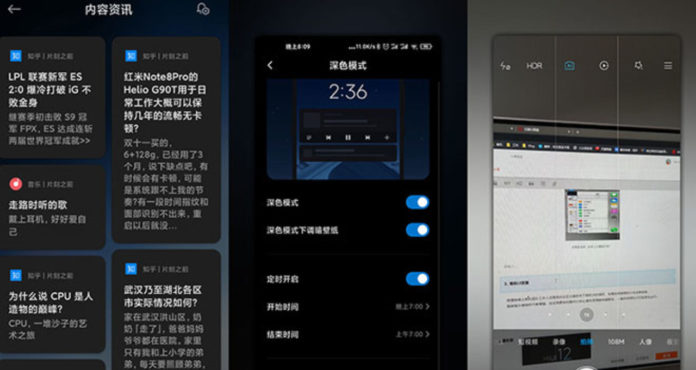 Xiaomi recently announced that it has begun to develop its new interface, MIUI 12. Xiaomi users were little excited with this statement that now the first screenshots of MIUI 12 have appeared.

Chinese technology manufacturer Xiaomi is one of the most popular smartphone manufacturers of recent times. With its flagship and budget-friendly phones, the company has managed to attract millions of consumers. Consumers also enjoy using MIUI, Xiaomi’s customized Android interface. Xiaomi is currently working on MIUI 12, which it will offer to its customers in the future.

Xiaomi launched the MIUI 11 on September 24, 2019. This was actually anticipated because Xiaomi was generally performing MIUI updates between August and September. However, the company announced that while the consumers have not yet gotten used to MIUI 11, this interface has stopped the development process and started its work for MIUI 12. Even now, we have the first screenshots of MIUI 12.

Now we will transfer some screenshots shared with you from MIUI 12. These images were revealed by a developer on Xiaomi’s official forum site in China. In other words, it should be noted that the features in the screenshots are not final for MIUI 12 and that these features can be completely removed or changed in the future.

Shared screenshots and some emerging features for MIUI 12
Changes and movements to the navigation bar
Xiaomi is a bit behind in MIUI’s system animations. While other smartphone makers have made their systematic animations both smooth and stable, Xiaomi has never been able to reach the point it wants. But apparently MIUI 12 will now offer both a more stable and up-to-date animation style for users.

Camera interface is changing almost completely
Sharing the screenshots of MIUI 12, the developer says that with MIUI 12, consumers will have a brand new camera interface. We can say that this is important for Xiaomi because Xiaomi has attracted attention especially with the developing camera hardware recently. This resulted in the need for a new camera user interface to make the new features easier to use, and Xiaomi seems not to ignore it.