Home Science The First Photograph of the Powerful Jet from the Clash of the... 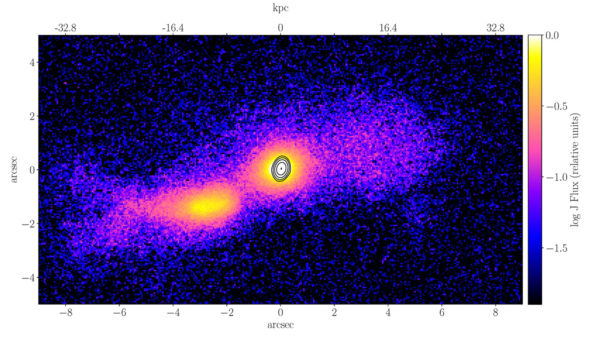 A team of Clemson University researchers detected a jet emerging from two colliding galaxies. The shared image of the collision indicates that the merging galaxies can produce charged particle jets that move at the speed of light.

Scientists have discovered that the shapes that have appeared previously can be found in elliptically shaped galaxies, which can occur when jets connect two spiral galaxies. Now a photo showing the formation of a jet from two youthful and spiral-shaped galaxies was obtained.

“For the first time, we have found two spiral or disc-shaped galaxies on a collision path that has just started life in the center of one of the galaxies, producing a newborn” baby “jet, whose results are published in the journal Astrophysical Journal. The jet was too young, making the researchers’ job easier.

Scientists have broken new ground in space:
“Typically a jet emits so strong light that we cannot see the galaxy behind it,” said Professor Stefano Marchesi, who took part in the study. “This jet is less powerful, so we can see the galaxy where it was born,” Marchesi said, comparing all we can see to the flashlight.

Jets are known as the most powerful astrophysical events in the universe. These resources can spread more energy into the universe in a second than the Sun will produce over its entire lifetime. This energy; it occurs in the form of radiation, such as radio waves, X-rays and gamma rays.

Dieter Hartmann, another name in the research, said, “Jets are the best accelerator in the universe. He is much better than the super collider in the world. ” Jets; It was thought to be born from old, elliptical shaped galaxies with Active Galactic Core (AGN), a large black hole in its center.

As a reference point, scientists believe that all galaxies have super large black holes centrally, but not all of them are AGN. For example, the huge black hole of the Milky Way is motionless. The team used the 8.2-meter optical infrared Subaru Telescope in Hawaii, one of the largest ground-based telescopes on Earth, to capture the image.