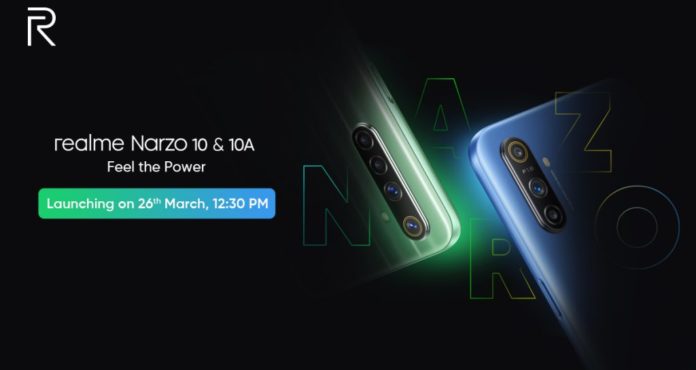 Details of the Narzo series new phones announced by Realme as of yesterday have been announced. In the statements made by Realme, it was stated that the phones named Narzo 10 and Narzo 10A will have a 5,000 mAh battery and a 6.5 inch screen.

In a news we shared with you yesterday, we mentioned that Realme is working on a new phone series, and that this smart phone series called “Narzo” will be aimed at young people and will compete with series such as Redmi and Poco. Now Realme has announced the features and release date of the Narzo series first phones.

According to the statements made by Realme, the new phones will be called “Narzo 10” and “Narzo 10A”. Both models, announced to be released on March 26, will have a 89.9 percent screen-to-body ratio and will come with a 6.5-inch screen as well as a 5,000mAh battery. Realme’s Narzo series new phones look like new versions of Realme 6i and Realme C3.

Realme announced the phone “6i” model, powered by the world’s first MediaTek Helio G80, as part of an event it recently held in Myanmar. When we compare Realme’s explanations about Narzo 10 with the specifications and design announced for Realme 6i, we see that there is no difference. This indicates that Realme 6i will re-brand with the name Narzo 10.

Realme announced its new budget-friendly phone, C3, in an event it held about a month ago. The phone, which managed to attract the attention of consumers with its technical features, revealed that the balances in the smartphone industry were changing. The image that Realme shared for the Narzo series shows that Narzo 10A is also a slightly differentiated version of Realme C3.

The new phones, Realzo’s Narzo 10 and Narzo 10A, developed for young people, will come out with all the details in the coming days. The expectations are that Narzo 10 and Realme 6i will be almost exactly the same, while Narzo 10A will be a slightly improved version of Realme C3. Also, the price of Realme’s new phones will be announced on March 26.

How To Work Comfortably Directly On The Cell Phone?