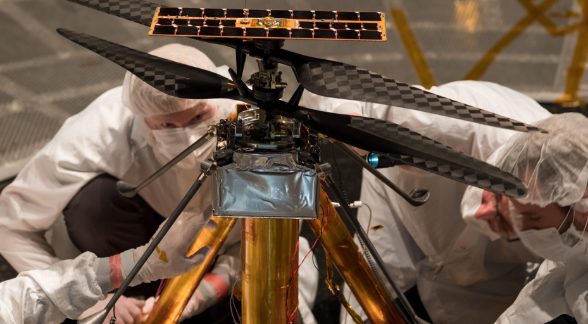 The Mars rover Perseverance took the first step this evening to take a big step for small humanity for himself. The Mars helicopter, named Ingenuity, will make its first flight on April 1. This flight is of great importance for the Mars mission and human history.

Historical test for Mars mission from NASA: the first vehicle to fly

The Mars rover, called Perseverance rover, landed on the Mars Jezero Chater on February 18. In this important landing, there was a kind of helicopter in Perseverance’s belly.

Mars helicopter Ingenuity and its features

The Ingenuity helicopter weighs 1.8 kg. The helicopter, which has a very light structure, is capable of flying in the Martian atmosphere. The atmosphere of the planet Mars has a density of 1 percent of the earth’s atmosphere. That’s why the helicopter’s propellers move 10 times faster than a normal helicopter.

At night in the Mars Jazero Crater the air is minus 90 degrees. NASA engineers say this low temperature will push the helicopter to its limits. It is a matter of curiosity how Ingenuity, which is based on all the hard experiments in the world, will behave in the atmosphere of Mars.

The first flight of the helicopter will take place on April 1. After this first flight, Ingeunity will be the first aircraft to fly on a planet other than Earth.

In the live broadcast, it was revealed how the helicopter would make a flight test. Perseverance will fly in an area of ​​three meters after leaving the vehicle. The helicopter will land on the take-off area again after taking a picture in the air.

How dinosaurs turned out to reproduce