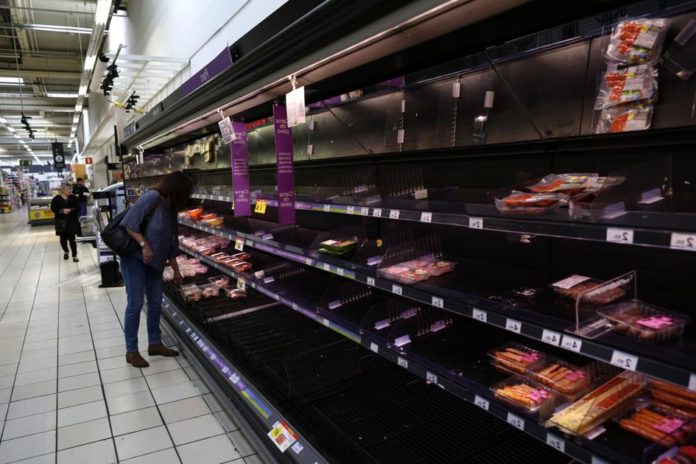 That the first corona virus cases seen in Turkey last night after the announcement by the Minister of Health, people flocked to markets. The images of the shelves that were emptied after the intensity in the markets were like the evidence of the panic.

Upon the announcement of the first corona virus cases detected in Turkey, people began to take precautions. Citizens have started to stock up on food, cleaning and disinfectant, although officials have announced that the incident will not mean a virus outbreak.

The images that appear in the markets are astonishing. In a photograph taken at a Migros in Bostanlı, İzmir, the shelves with food, cleaning and disinfectant materials are completely empty. It is seen that in many cities outside of Izmir, people turn to markets to take measures against the possibility of virus outbreak.

Turkey’s four photographs taken by a show that is similar to the situation in other markets. The shelves with food and cleaning materials were emptied especially in the markets in big cities such as Izmir and Istanbul.

After the experts said that the colony would work in anti-virus measures, the queues overflowing in front of the cologne manufacturer Eyüp Sabri Tuncer’s store in Ankara Ulus became an agenda on social media. It is claimed that the stock of cologne is exhausted in markets such as BİM, A101 and ŞOK.

It is difficult to predict how long the intensity in the markets will continue in this way. However, Ministry of Health officials announced that the detected corona virus case will not turn into an epidemic. The fact that the person detected the virus has not met with too many people after coming from Europe and the quarantine of his close circle is shown as the reasons to decrease the possibility of virus outbreak.

Cardano (ADA) Strengthens Its Hand on the DeFi Side