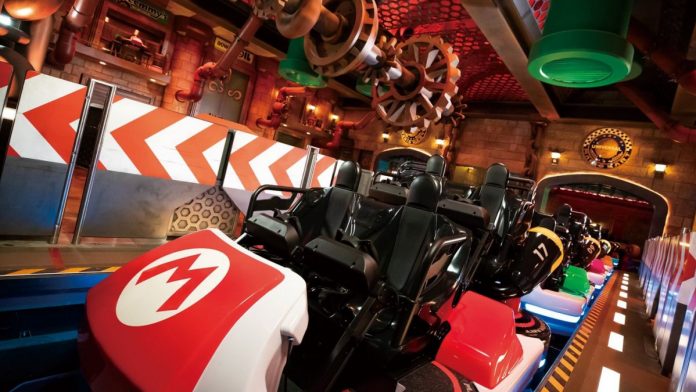 The Universal Park of Japan will premiere in February a thematic region based on Nintendo and sagas like Mario Kart, the protagonist of its new ads.

Who has not ever imagined what Mario Kart would be like in real life? Well, it is possible that soon we can discover it in person and that we no longer need to pull our imagination. The latest announcement from the Universal Park of Japan about its new thematic region, Super Nintendo World, focuses precisely on this area and its attraction based on Mario Kart. An attraction called Koopa’s Challenge and that, from what little we can see, allows us to get on board karts for four people and race in them through some of the most emblematic circuits of the franchise, such as Bowser’s Castle or the Senda Rainbow Although the cars are guided by rails, visitors will have their own “karts and virtual objects”, which will be handled like an augmented reality minigame and will allow them to experience what it feels like to compete in the most famous tournaments of the Mushroom Kingdom. If the blue shells already piss us off on the screen, we don’t even imagine in real life.

As we said, Super Nintendo World is a themed section within the Universal Park of Japan. A place where we will find attractions, restaurants and shops inspired by the great Nintendo franchises (such as Super Mario, The Legend of Zelda or Pokémon). It will open its doors on February 4, 2021 and in recent days it has been releasing more and more details about its attractions, content and operation. We even had a Nintendo Direct with Miyamoto focusing on the park. For knowing, we even know by heart the menu of the Mario Café & Store restaurant, with its own pancakes in the shape of Luigi’s cap and some nice bottles that look like Toad. But if something has caught our attention, it is the park entrance bracelets, the Power U Band, which will work like the Amiibo and will connect to our Nintendo Switch and an application that we will have to download on the mobile. The bracelets allow you to interact with more than 150 objects in the room, which will move, illuminate or emit sounds when you bring your wrist closer. They also allow you to participate in augmented reality minigames with which to earn coins for said application. We are at the birth of one of those dream destinations for every gamer worth his salt.

Tackled by Decathlon following an error in the Lupine series