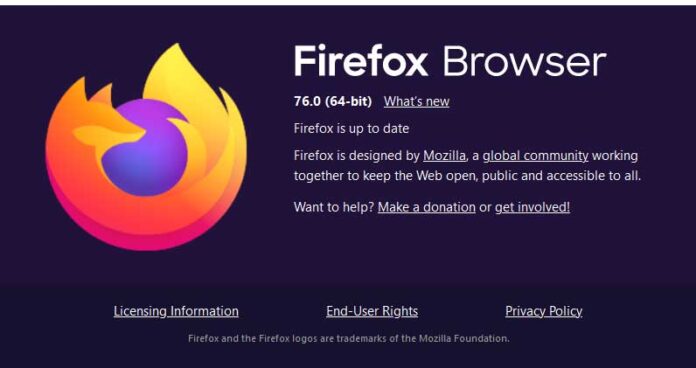 Mozilla has released a new version of the popular internet browser Firefox. Firefox 76 came with password management and Zoom improvements.

Let’s also mention that all existing users should be able to automatically upgrade to this version. By the way, according to Mozilla, Firefox has about 250 million active users. This makes Mozilla an important platform for developers to consider.

Firefox 76 came with two important updates:
Mozilla started bringing an update to Firefox every 4 weeks this year. This period previously ranged from 6 to 8 weeks. Before the coronavirus epidemic, Firefox staff and contributors worked remotely. The new update was remotely tested and collaborated between timeframes.

While the program schedule remained unchanged, Mozilla implemented the roadmap to avoid changes that could adversely affect the user experience or disrupt government and healthcare websites. The company is also committed to solving video conferencing problems.

Update for Firefox Lockwise and Zoom calls:
Firefox Lockwise, the password manager for the Firefox browser, has become ‘smarter’ with the update. If you share your device with anyone, Lockwise in Firefox 76 now has the ability to protect your saved passwords. When you try to view or copy a password from your ‘Logins and Passwords’ page, you are asked to enter your device’s account password.

In the coronavirus epidemic period, there is a significant increase in the use of video calling programs due to the increase in internet usage. Zoom is also one of those applications. Aware of the situation, Mozilla enables people to join Zoom calls via the browser without downloading the program in question with the Firefox 76 update.