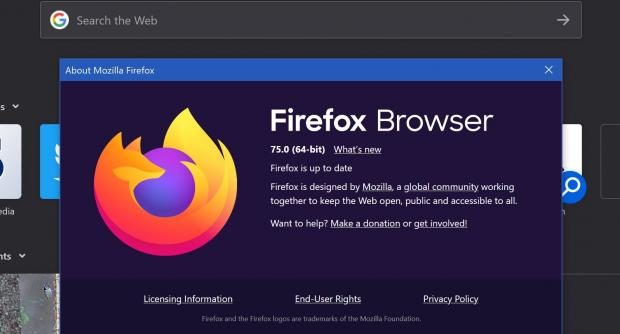 Mozilla has released a new stable version of the popular web browser Firefox. Firefox 75 offers a smoother browsing and searching experience with improvements to the address bar.

Mozilla has released Firefox 75 for all supported desktop platforms such as Windows, Linux and macOS. Although the company has not yet announced the changes made by the update, the new version includes all the features tested in the beta version, including the recently released security fixes for Firefox 74.

Address bar improved with Firefox 75
Firefox 75 is the first stable release following Mozilla’s plan to release updates faster. Currently, Mozilla plans to release a new major version of Firefox every 4 weeks. Even though Firefox updates are published faster now, the number of improvements made in each new version is decreasing.

Firefox 75 comes with address bar improvements that Mozilla announced in its first beta release on March 10. The new update aims to help users find more by typing less. The address bar now contains links to the most frequently used sites.

SONY WOULD HAVE THE NEW PREPARED XPERIA