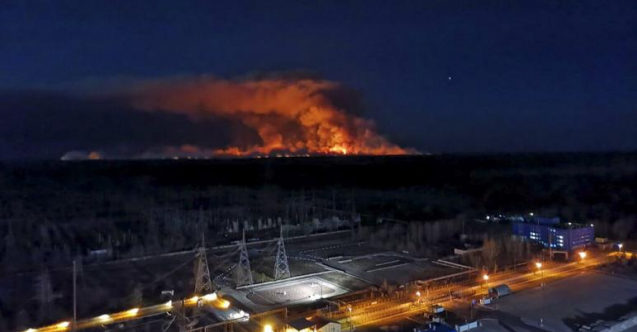 The fire danger in Ukraine continues towards the region. 1 kilometer to Chernobyl. Fire cannot be extinguished … The environmental organization warned that Greenpeace may increase the risk of radiation.

Environmental organization Greenpeace warned that the fire in Ukraine last week was about a kilometer from the Chernobyl nuclear disaster, and that the situation could increase the risk of radiation.

The Ukrainian State Emergency Service announced that the fire was under control but the flames continued at some points. It was noted in the images of the Reuters news agency that the 30-kilometer security zone around the area where the nuclear disaster took place has been darkened by fires.

Explaining that the first fire spread over 34 thousand hectares according to satellite images, Greenpeace announced that the second fire, which took the effect of 12 thousand hectares, approached the region where the Chernobyl disaster occurred.

The Ukrainian State Emergency Service announced that the radiation rate in Kiev and the Kiev region is within normal limits. Greenpeace notes that satellite imagery shows that the situation on the ground is more serious than official statements.

An explosion occurred on 26 April 1986 at the Chernobyl Nuclear Power Plant, 110 kilometers from Kiev, the capital of Ukraine, and witnessed the world’s largest nuclear disaster.

The poisonous cloud emerging from the explosion affected Russia and Europe, especially Ukraine and Belarus, and poisonous clouds reached the USA, Canada and even Japan.

According to the data of the World Health Organization, 600 thousand people working and living in the 30-kilometer region where the disaster took place were exposed to high doses of radiation, and millions of people in the world, especially the neighboring countries of Ukraine, were negatively affected.

Dramas with open endings that will make you feel confused

Google’s Gesture For The 25th Anniversary Of Friends