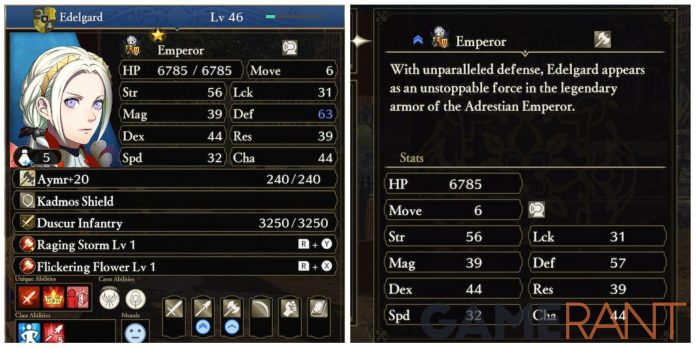 The Emperor Class was a unique Class for Edelgard in Fire Emblem: Three Houses, and, along with the Armored Lord Class, it makes a return in Fire Emblem: Three Hopes. Because it’s a Master Class, it will take some time before players can unlock Emperor. Much like its Three Houses counterpart, the Emperor Class’ main skills are Axes and Authority. Edelgard will also gain additional growth in Heavy Armor.

The Emperor Class shares a trait with the Cavalier Classes in Fire Emblem Warriors: Three Hopes. By charging into enemies, Edelgard can knock aside weak enemies. While the Emperor Class will end up being Edelgard’s main Class, it’s recommended to have her master other Classes to gain more Abilities and make her into a powerful unit. This will help combat the Emperor’s weaknesses, thus making combat easier.

The Emperor’s best stats are its Strength and Defense. Its poor Speed and Resistance mean that Edelgard should steer clear of enemies that excel in Magic, such as the Gremory and Dark Bishop Class. On the other hand, Edelgard’s Strength and Defense allow her to go head-to-head against most enemies, thus making her ideal for seizing Strongholds and attacking commanders.

Despite the low Magic growth for Emperor, Edelgard can benefit from mastering the Gremory Class thanks to her Budding Talent in Reason. The Budding Talent mechanic doesn’t quite exist in Three Hopes. Instead, units who master a certain Class will gain an Innate Ability. Not every Innate Ability is worth unlocking, but Edelgard’s Nullify Magic is ideal for her Emperor Class.

By the start of Chapter 4, Edelgard will automatically be reclassed to Armored Lord and will have a new weapon equipped: Labraunda. The Emperor Class unlocks once players have neared the halfway point of Scarlet Blaze. However, it requires a Master Seal and the mastery of the following Classes:

The Fighter (Beginner), Armored Lord, Fortress Knight, and Emperor Class are all recommended Classes for Edelgard. Although the Emperor and Armored Lord are considered “armored units,” they will nullify armored effects. Thus, it’s not necessary to equip Edelgard (as Emperor or Armored Lord) with a Kadmos Shield. Players can, however, equip her with a Charm-increasing Accessory. Edelgard’s high Authority from the Emperor Class couples well with high Charm. The purpose of Charm in Three Hopes is that it builds stronger endurance for assigned battalions.

The Emperor Class has the following Class Abilities:

Charm: Will restore some HP to surrounding allies upon defeating an enemy commander. Lance Buster Lv 5: Increases damage to lance-wielding enemies by 100%.

When the Emperor Rank reaches a milestone (i.e: star/rank), a new Ability will be learned. Some of these can be equipped by Edelgard regardless of her Class:

Ability Unlocked at Description Lancebreaker Rank 1 Deals 50% more damage to lance-wielding enemies. Armored Strike Rank 1 Combat Art that deals damage even if the opponent is guarding. Flickering flower Rank 2 Combat Art that breaks an opponent’s guard. Seasoned Tactics Rank 2 Edelgard’s assigned battalion will regain Endurance when she defeats an enemy commander. Stormer of the Land Rank 3 Damage taken from an enemy is calculated by how much lower their Charm is compared to Edelgard’s.

Since the Emperor Class has lower Speed than most, players may find it more beneficial to equip Guard-based Abilities rather than Abilities that enhance Perfect Dodges. However, Edelgard is still capable of learning Abilities such as Muster and Tableturner for those that prefer dodging over guarding. A build ultimately comes down to personal preference, but players should always keep in mind what type of unit they’re trying to improve upon.

Units can equip up to ten Abilities if the Tactics Facility has the right enhancements. The following is a list of Abilities that pair well with the Emperor Class. They can be swapped out and changed to fit preferences:

Since Edelgard’s good for battalions, players can swap out the above Abilities for Seasoned Tactics or Battalion Renewal if they prefer. Most of Edelgard’s potential is brought out by making full use of her Solar Prominence Ability. Thus, combining this with Essence of Fire and Fiendish Blow will make nearly all of her fire-based attacks extremely devastating to masses of enemies.

As mentioned before, Edelgard’s Innate Ability is perfect for her Emperor Class thanks to its low Res. Players should take the time to master the Gremory Class, or they can train her at the Training Grounds. Edelgard learns some powerful dark magic like Hades and Luna. However, these Combat Arts can’t be used when Edelgard is classed as an Emperor.

For Combat Arts and Equipment, Flickering Flower and Raging Storm are useful, while having her wear a Charm/Strength-enhancing Ring will give her an extra boost in stats.

Combat Arts: Flickering Flower will break an opponent’s guard, while Raging Storm deals Fire Magic (Burning) and depletes the Stun Gauge. Alternatively, players can swap out one of these Combat Arts for Armored Strike, which will deal damage even if the opponent is guarding. Edelgard will learn more Axe-based Combat Arts by mastering Classes like Brigand, Wyvern Rider, and Warrior. Accessories: This will depend on whether Edelgard is using battalions or relying on raw strength in battle. A Mesmerizing Charm Ring will increase Charm by ten; a Monstrous Strength Ring increases Strength by ten. If players are neglecting battalions, then the Monstrous Strength Ring is preferred.