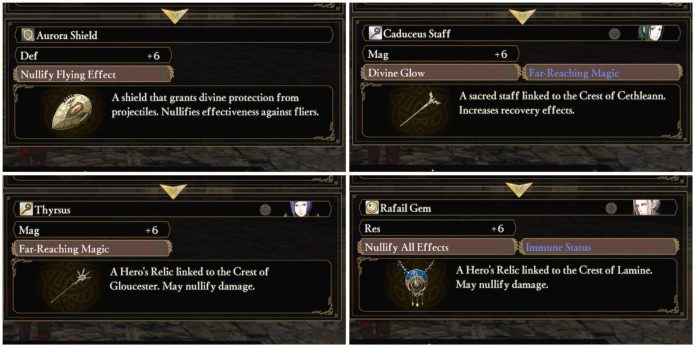 Like its predecessor, Fire Emblem Warriors: Three Hopes includes accessories that players can equip their units with. There are ordinary accessories that can be equipped with any unit, and there are Hero Relics that only certain characters can own. Understanding the strengths and weaknesses of your army will help players decide which accessories to keep and which to throw away.

In Fire Emblem Warriors: Three Hopes, it is not possible to buy accessories from an item seller. Unsurprisingly, the accessories with the best perks are hidden behind the main quests and side quests. Some Hero Relics can only be obtained in one way. Fortunately, after adding the accessory to the convoy, it is transferred to New Game Plus.

Ring of Prayer and Goddess

While players will get better gear as they progress through the “Three Hopes” campaign, “Prayer” and “Ring of the Goddess” are good accessories for “beginners”.

When equipped, they give units the “Upgrade” ability, which heals them periodically. The reason why the Goddess Ring is preferable to the prayer ring is that it gives its owner an additional +5 to luck.

The only other way to get the “Upgrade” effect is to master the healer classes in the Monk Class Tree (for example, Priest, Bishop). The goddess Ring is well suited for units with weak defense or if players prefer not to send a healer into battle.

How to get: The Prayer and the Ring of the Goddess can be obtained by studying the war map. Sometimes an NPC will offer a goddess/prayer ring and other accessory. Please note that players can only choose one. However, these rings can be obtained by completing the main quests. Upgrade your Supplies to increase the amount of goods after the battle.

As the name suggests, the Critical Strike Ring and the Evasion Ring increase the probability of critical strike and evasion, respectively. They are ideal for fast attacking units or units that excel in the Thief class lineup.

Characters with high dexterity are well equipped with a critical strike ring. This is due to the fact that the amount of damage inflicted during a critical dash depends on dexterity.

The evasion ring is ideal for units that need to rely on evasion (like the Pegasus knight). They give the wearer the “Vigilant Stance” ability, which increases the invulnerability time after performing a “Perfect Evasion”.

How to get: Players can choose an evasion ring or a critical strike by viewing the war map.

These three shields are ideal for units that can’t learn the “Zero Flight”, “Cavalry” or “Weakness in Armor” abilities of the “Wyvern Lord”, “Holy Knight” and “Great Knight” classes, respectively.

Aurora’s shields will save the Pegasus knight/wyvern rider from a weakness for the bow. At the same time, the Kadmos Shield will prevent an armored class (for example, a Fortress Knight) from taking additional damage from weapons such as Armorslayers.

The best thing about these shields is that they can be equipped by both commoners and nobles. Characters who succeed in Flying or riding class must equip one of these shields if they cannot use the Heroes’ Relic.

How to get: Like rings, shields can be obtained by studying the war map. Sometimes they will serve as a reward for getting the S rank in battle.

The Thyrsus is a relic of Heroes associated with the coat of arms of Gloucester. It not only expands the range of magical attacks, but also has a chance to negate any damage that a unit can receive.

Unfortunately, only units with the coat of arms of Gloucester can equip Thyrsus and use his effects. This means that the Thyrsus can be fully used only if it is owned by Lisithea or Lorenz.

The far—reaching Magic ability is the basic ability of Magic Staff items that anyone can equip. However, he lacks the bonus of Tirsus to “zero damage”.

How to get: payers will need to hire Lorenz (Scarlet Blaze) or go through the Golden Forest Fire branch. To unlock Thyrsus’ Far-Reaching Magic ability, its effect must be released from the blacksmith.

The Caduceus staff will expand the range of magical attacks (like the Tirsus), but will also heal its owner periodically. This works exactly the same as a stronger version of the upgrade ability. The Caduceus staff is good for units created for healing, such as Linhardt and Flane.

Since it is a Relic of Heroes, the Caduceus is compatible with units that have the Ketlinn Coat of Arms. An alternative to the caduceus staff are healing staffs.

The Vampire Diaries: These are 2 actors who fought on set...