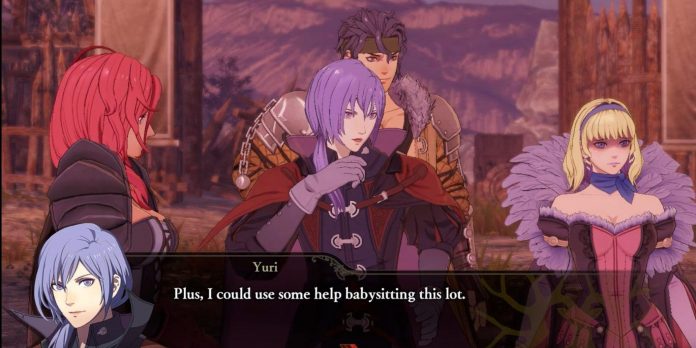 Paralogues appear in each of the game’s three branching paths, and can only be accessed if the player has recruited all characters involved. They are optional, but typically provide valuable rewards such as battalions, weapons, or stat-increasing items. Paralogues are also used to showcase interactions between characters who might not otherwise get to bond due to the game’s large playable cast. A few even reveal more about the lore and history of the land of Fodlan, the goddess Sothis and the Four Saints, and the activities of the villainous Those Who Slither in the Dark. Almost every playable character in Fire Emblem Warriors: Three Hopes is given focus in at least one Paralogue, with some appearing in multiple.

Cycles of Nostalgia – Arval – A key Paralogue, available in all routes. It reveals many secrets about the mysterious Arval’s true identity Eagles, Lions, and Deer – Gatekeeper – An extra-challenging fight against the members of all three houses, this Paralogue truly puts players to the test alongside the fan favorite Gatekeeper. A Noble Among Nobles – Ferdinand, Constance, Lorenz – A much-needed bit of levity in an otherwise dark game, this “nobility competition” leaves players laughing. Wildflowers for the Future – Dedue, Ingrid, Felix – Ingrid’s widely-disliked character is finally examined in needed detail as she is forced to overcome her prejudice regarding the people of Duscur. Right Where They’re Wanted – Holst, Balthus, Hilda – Another light-hearted paralogue, this fight makes excellent use of the game’s unique musou mechanics to give Hilda a chance to shine.

Unsettling Truths – Raphael, Ignatz, Lorenz – This Paralogue ranks so high primarily because of its availability, as the three characters involved can be recruited on any route. The Ashen Wolves’ Reunion – Yuri, Constance, Balthus, Hapi – The formerly DLC-locked Ashen Wolves desperately needed more focus in Three Hopes, and this paralogue accomplishes that admirably. Enshrouded Memories – Edelgard, Lysithea, Hapi – Adrestian Empire leader Edelgard is given a much-needed chance to interact with characters outside of her Black Eagle house in this character-focused paralogue. A Reason to Fight – Jeralt, Byleth, Leonie – Byleth and Jeralt’s father-child relationship is finally given its moment in the spotlight in this Paralogue. What Lies Within – Hilda, Marianne – Shy Marianne comes out of her shell and displays confidence while rescuing her best friend Hilda. Coming Clean – Claude – This extra-challenging Paralogue gives players only two units to control against a veritable horde of enemies and bosses. Raiders from the North – Dimitri, Sylvain, Rodrigue – This Paralogue’s only downside is that it does not include Felix, despite his supposed relevance to its events. A Night of Wonder – Mercedes, Annette, Constance – Annette and Mercedes’ friendship is always heartwarming, and Constance’s unique personality makes a fun addition.

A Grand Day for the Opera Company – Dorothea, Manuela – While the plot of this Paralogue is fun, it suffers from a repetitive gimmick of needing to defeat certain enemies with specific characters that goes on far too long. The Seiros Snare – Hubert, Jeritza, Petra – Edelgard’s retainer Hubert and the Death Knight Jeritza miss their chance to bond in this plot-light and dialogue-light Paralogue. Like Cats and Dogs – Caspar, Linhardt – Caspar and Linhardt’s friendship is fun, but this Paralogue fails to bring the humor when compared to other similarly light-hearted chapters. Under the Protection of the Golden Deer – Lysithea – While Lysithea is a fun character to play with her powerful dark magic, this unit-limited Paralogue is ultimately not as interesting as Claude’s solo outing. The Saints’ Forge – Rhea, Seteth, Flayn, Cyril – This Paralogue focuses on characters who are otherwise ignored, but it does not particularly stand out gameplay-wise. Cyril, an otherwise neglected character, is given very little to do in his sole focal moment.

An Incurable Shut-In – Bernadetta, Monica – This Paralogue feels thrown in and almost unfinished, as Bernadetta and Monica, who otherwise barely interact, complete a fairly dull mission alongside a generic NPC who isn’t even given a unique design. Evil’s Bane and Love’s Protection – Alois, Jeralt, Shamir, Catherine, Gustave – While this Paralogue also gives neglected characters their moment to shine, it ranks low due to its tricky mechanic of preventing enemies from escaping which forces many players to replay it over and over. Mercenary Complications – Leonie, Shamir – The weaker of Leonie’s two Paralogues, this fight fails to reach the heights of her outing with Jeralt and Byleth and is generally forgettable when compared to the many better paralogues.