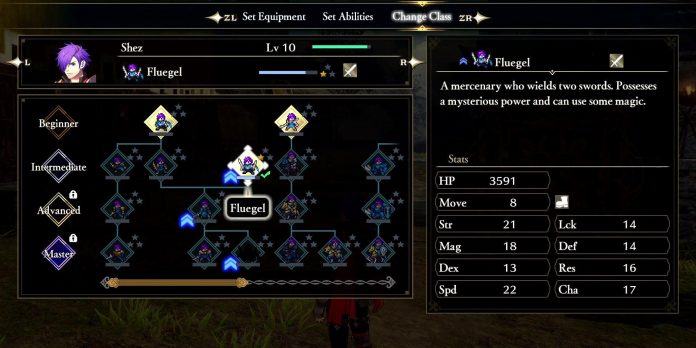 There are 36 regular classes in Fire Emblem Warriors: Three Hopes, as well as 12 character classes and three unplayable classes. As in the first Fire Emblem Warriors game, players will be able to level up and change the classes of their units as they progress through the main story. However, at the first launch, Shaz’s class will be tied to Fluegel, and players will need to go through the prologue before they can start making changes.

RELATED: The Most Useful Classes in the History of Fire Emblem

After that, changing the unit class in Fire Emblem Warriors: Three Hopes is actually quite simple. All the players need to do is go to the “Convoy” menu, and then go to the desired tab. Unlocking new classes for the transition is not so easy, because for this, players will need to accumulate both experience and items. It can be hard work, but for those who want to get the most out of their units, the rewards are definitely worth it.

How to change the unit class in Fire Emblem Warriors: Three Hopes

There are two ways to change the unit class in Fire Emblem Warriors: Three Hopes, both of which become available after players have reached Chapter 4. Depending on the house they choose, it will be either “Shadows of the Dynasty” (Scarlet Flame) or “To War!” (Azure Radiance and Golden Wildfire). The first way, as mentioned above, is to open the “Convoy” menu, and then use the Z buttons to go to the “Change Class” submenu after selecting a character.

In addition, players can switch to a new open class immediately after it opens on the training ground. Certain units are better suited for certain classes (as indicated by the blue arrows next to them), but that doesn’t mean that players can’t experiment with some of the other classic Fire Emblem classes available in Three Hopes. In addition to discovering new abilities for your units, regularly changing the unit class can also help keep the combat fresh.

To unlock a new class for a unit, players first need to master the one that precedes it. They can do this by using a class in combat or by selecting the “Train” option on the training ground. Initially, they will only be able to train six units at a time, although this number will gradually increase as the facility is upgraded. High morale can lead to greater gains when using any method, so it may be worth treating the squad with a nice gift or delicious food in advance.

After the class is mastered, players can go to the “Purchase Class” menu on the training ground to unlock its next form. Each new class will require a seal that players can find in battle or buy from merchants. Initially, they will only be able to unlock intermediate-level classes, and advanced-level classes and masters will become available only after players upgrade the training ground to the required level. Unfortunately, the opportunity to do this again is linked to the development of the main plot; presumably so that the players don’t become too OP too fast.

Season 6 of “Peaky Blinders”: Meet a new character who brings...