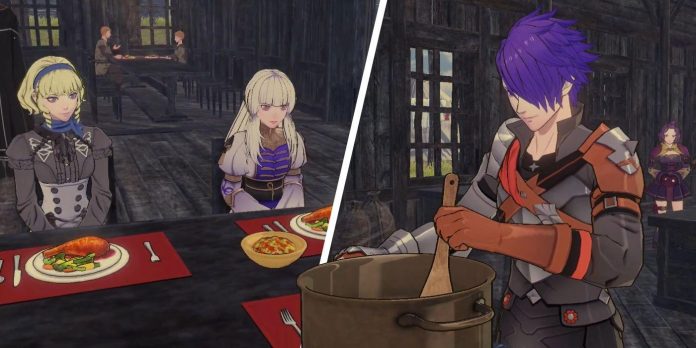 Cooking is a mechanic in Fire Emblem Warriors: Three Hopes, in which players can participate to give their characters various combat effects and benefits, including raising the morale of the squad. The main character will get access to cooking as soon as he completes the first side quest of Chapter 4, depending on which storyline he has chosen. During this quest, players will be assigned to help the Master of the Household in Fire Emblem Warriors: Three Hopes, after which they will be brought to the Recreation Quarter, where they can learn the basics of cooking for allies.

The effect of cooked food in Fire Emblem Warriors: Three Hopes will be valid until the end of the chapter. Accordingly, the main character should try to feed his strongest or favorite characters with food at the earliest moment of activity. In addition, the positive effects add up, allowing players to cook multiple dishes for allies, maximizing the beneficial status effects provided to their characters. Keep in mind that food effects apply to all units, regardless of whether they have been selected as food companions. The main reason why players can choose certain characters is that they can increase support points for those specific units.

Link: How to Get Strategic Resources in Fire Emblem Warriors: Three Hopes

To get started, go to the Recreation Quarter and talk to the kitchen master in Fire Emblem Warriors: Three Hopes. Select “Cook a Meal” to view the menu, which presents a wide selection of recipes that players can cook. Under the menu there are active food effects for the dish.

How to Cook on Fire Emblem Warriors Three Hopes

Naturally, not all recipes will be available at the beginning of Fire Emblem Warriors Three Hopes. As the main character goes through the main campaign, he opens up more food options, including access to more ingredients. Ingredients for cooking can be purchased from the owner of the item store or complete quests and buy them in exchange for earned rewards.

Not all dishes are prepared the same in Fire Emblem Warriors Three Hopes. Players must take several steps to ensure that their food reaches at least the “Excellent” or “Perfect” level in order to get the maximum benefit from the dish. There are two main ways to increase your chances of cooking the Perfect meal. First, select the helper characters in Fire Emblem Warriors with the blue up arrow next to their avatar. This icon indicates that they have a better chance of helping the main character achieve the perfect meal. In addition, the expansion of the Recreation Quarter and the Training Ground can also affect whether a player gets the highest score in cooking. Thus, be sure to collect the necessary materials to improve the Recreation Quarter.