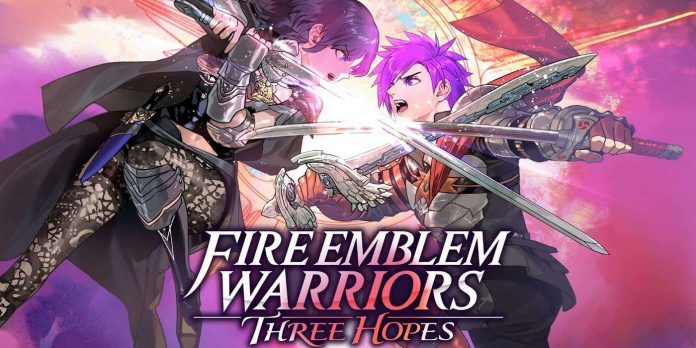 A new adventure awaits in Fire Emblem Warriors: Three Hopes, a spin-off title based on the 2019 edition of the series, Fire Emblem: Three Houses. Developed by Intelligent Systems and published by Nintendo, Three Hopes exchanges the turn-based strategy gameplay of most Fire Emblem titles for brutal real-time combat. The game also expands on the personalities of favorite characters from Three Houses, making each new chapter more emotionally riveting as players explore the mysteries and intrigue between heated battles.

Fire Emblem Warriors: Three Hopes takes place just after the main cast of characters leave The Officers Academy. Following the path of a new main character, players must help construct a thriving military camp, create strategic battle plans, and build relationships to improve teamwork in combat. Three Hopes does an excellent job of combining the importance of down-time activities with complex battle mechanics, making the transition between narrative-driven gameplay and combat sequences seamless and rewarding. It is a nice change from older Fire Emblem games, which can sometimes become bogged down with pre-battle requirements.

Like the recent The Legend of Zelda: Breath of the Wild spin-off Hyrule Warriors: Age of Calamity, Fire Emblem Warriors: Three Hopes is developed with mechanics made popular by Dynasty Warriors. This includes real-time battle sequences on sprawling maps, and the ability to dispatch dozens of enemies at any given time. While not the first Warriors title in the Fire Emblem series, Three Hopes does an excellent job of adapting the iconic turn-based gameplay into a Nintendo Switch-supported, action-packed battlefield. The original Fire Emblem titles use a format that is similar to a chess board, with each character moved around the battle map in a sequence of turn-based actions. Three Hopes puts a spin on this mechanic, allowing players to easily toggle between characters using their direction keypad on the left Joy-Con.

The combat in Fire Emblem Warriors: Three Hopes has also been fleshed out with different class skills. Players will slowly fill gauges that offer access to powerful moves, while regular weapons have special abilities that deal extra damage compared to standard melee blows. Additionally, different patterns of the “X” and “Y” buttons unleash unique abilities, turning battles into a brilliant flurry of attack combinations. Characters are also able to team up on the battlefield using the “Y” button while engaging the left bumper on the Joy-Con during combat. This allows partnered characters to stay close to each other during battles, as well as share a combo gauge that delivers more damage than a single character is capable of.

One of the most sought-after aspects of the Fire Emblem game series is the ability to build character relationships. In some games, this opens the opportunity for romantic connections, while in all titles the relationship statuses of characters determine their compatibility in combat. Fire Emblem Warriors: Three Hopes has taken these mechanics and carefully integrated them in the form of character bonding moments while at base camp and during dialogue options via cutscenes, as well as through time spent training, fighting, or keeping the camp together. Players are also able to engage in “expeditions”, which offer the opportunity to spend time with different characters one-on-one. The special cutscenes, bonding moments, and dialogue options are part of what makes Three Hopes so delightful to play, as it is easy to become immersed in each character’s personality, hopes, and desires.

When not tackling challenges on the battlefield or building relationships with characters in Fire Emblem Warriors: Three Hopes, players will find themselves with a list of important chores to accomplish around the base camp. During missions, building materials will be amassed that can be used to upgrade the many facilities that are accessible at the base camp location. This includes a shopkeeper, blacksmith, kitchen, and many other amenities. By upgrading each building, players gain access to higher-tier items, new resources, and additional services that help progress gameplay. While these types of tasks can be a chore to accomplish, Three Hopes includes an easy-to-use fast travel option, eliminating the need to run back and forth between different shops. Players also have a task list that appears on the screen when at base camp, making it easy to see what needs doing, before moving on.

One of the best aspects of Fire Emblem Warriors: Three Hopes is steady progression. Three Hopes has a large number of moving pieces both on and off the battlefield, but these are all introduced progressively, giving players plenty of time to learn about and explore features before gaining access to additional locations, tasks, or facilities. This choice offers players a chance to become hooked into the narrative without being overwhelmed by the requirements of commanding an army, fighting difficult battles, and building a base camp. The steady access also keeps Three Hopes interesting during the slower, narrative-heavy potions of earlier gameplay, ensuring the content stays engaging while larger plot points are being set up.