Home Science Finding Alien Life with Probes to be sent to Europa will be... 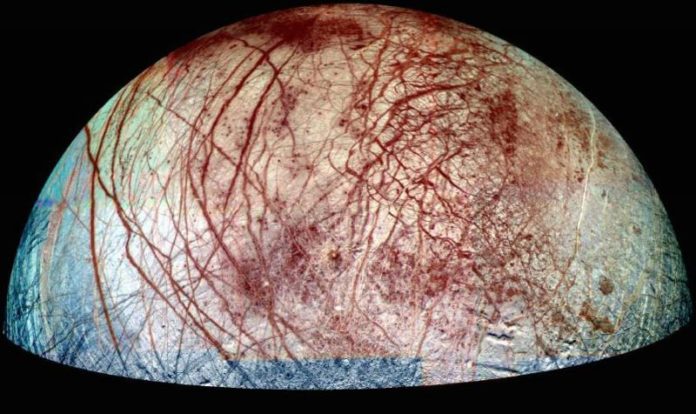 Humanity’s curiosity for space and the search for extraterrestrial life has been going on for years, and according to scientists, it is inevitable that we will find these traces of life. The most probable point for finding traces of alien life in our Solar System is Europa, the moon of Jupiter.

In May 2018, astronomers found some evidence of water activity in Europa, the smallest of the four largest satellites of Jupiter. This evidence, obtained by updating the data obtained by the Galileo space probe, greatly enhances the possibility that Europa is hosting extraterrestrial life.

The surface of the Europa, the most remarkable satellite of Jupiter’s extraterrestrial life, is completely covered with a thick layer of ice. However, scientists say that a very large ocean may exist beneath this surface. In addition, the surface of the satellite, completely covered with ice, makes Europa the most reflective object in the Solar System.

In August, NASA said it would create a space probe called Europa Clipper to investigate Europa. The European Space Agency announced in April that it will release Jupiter Icy Moons Explorer by 2029.

The task of Europa Clipper
Scientists; He believes that humanity is on the verge of discovering the best possible places to look for signs of alien life in the Solar System. Researchers think that Jupiter’s ice-covered moon Europa also has a spherical, salty ocean.

Mysterious satellite
Discovered by Galileo Galilei in 1610, the smallest of the four Galilean satellites of Jupiter, Europa is made up of silicate rock. The satellite, which has an ice-water shell, has a very thin atmosphere and oxygen.

A little smaller than our planet’s moon, Europa is the object with the softest surface of any solid object known in the Solar System. There is an ocean of water beneath the surface of the planet, which means it is a possible candidate for alien life.

Scientists think that the ice layer on the surface has a thickness of 20 to 50 km, and that the ocean beneath the surface has a depth of 100 km. If scientists’ estimates are correct, it means that there are 2 to 3 times more water in Europa than in Earth.

The possibility of life on the surface of the satellite is unlikely. Temperatures in the equatorial region of the planet can reach up to -50 degrees, and the average radiation level is 5.4 Sv, which is an estimated 1,800 times more than the annual average at sea level on Earth.

Scientists were able to examine the sources of slow earthquakes for...

NASA Launches Contest For The Design Of The Vehicle To Be...